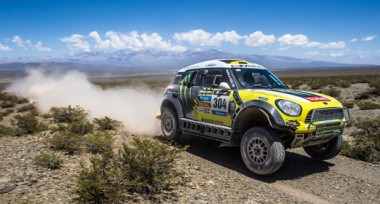 The fourth stage, from San Juan to Chilecito, represented a true challenge: its 501-kilometre special stage was one of the longest of the 2014 Dakar Rally. Right from the start, several drivers battled it out for the stage win and at the end of the day, French pairing Stéphane Peterhansel / Jean-Paul Cottret in the black MINI ALL4 Racing finished second behind Carlos Sainz. Nasser Al-Attiyah (QAT) / Lucas Cruz (ESP) took their white MINI ALL4 Racing to third position, with Federico Villagra (ARG) and Jorge Perez Companc (ARG) causing a stir by securing fourth place, with their MINI ALL4 Racing. Nani Roma (ESP) / Michel Périn (FRA) in the yellow MINI ALL4 Racing crossed the finish line in fifth position, followed by Orlando Terranova (ARG) / Paulo Fiúza (POR) in the orange MINI ALL4 Racing. While Krzysztof Holowczyc (POL) and his Russian co-driver had to settle for finishing 19th.

After the bad luck in kind of six punctures he had to cope with, yesterday, Peterhansel struck back by finishing runner-up, today. Due to a proposal of the Monster Energy X-raid Team, the Frenchman was moved up from 29th to 16th position in the starting order (a move that is allowed three times for the top drivers, according to the regulations). “Routes like today’s – long and difficult – are exactly what we need to re-close in on the podium positions or even the leaders,” said the Frenchman. “But unfortunately, we suffered a puncture just 25 kilometres into the stage and following yesterday’s incidents I wasn’t sure how fast I should and could go. But then, I found a good rhythm, nevertheless and was able to push again.” 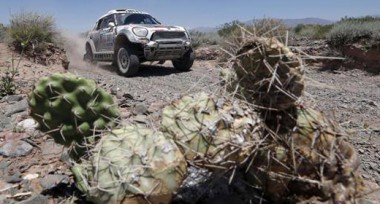 Al-Attiyah also was a factor in the battle for the stage win and held the lead for quite a while. Then, however, navigation problems due to an imprecise road-book and a puncture coast him time and he dropped back to third position. “Today’s special stage was difficult but I’m happy with what we achieved,” said the driver from Qatar. Terranova who finished sixth also was misguided by the roadbook and got lost at the same point as his team-mate. “Afterwards, we circled several times to find the right way”, he said. “This cost us quite a lot of time.”

Meanwhile, Argentineans Federico Villagra and Jorge Perez Companc caused a major stir by taking their MINI ALL4 Racing to fourth place after having held a top-flight position throughout the stage. “I’m truly surprised,” the Argentinean said beaming. “I didn’t push so hard. I drove fast where it was possible to do so but opted for a somewhat conservative approach elsewhere. We just were on a roll and had a good day.”

For Roma, today’s stage represented an anything but easy task. As winner of yesterday’s stage, the Catalan was the first to go out today and had to find his way without motorbike traces as navigation orientation. The bikes raced on another route, today, and so, Roma had to act as pathfinder for the other drivers. “Today’s special stage was very difficult. In the opening stages, there were some ditches that couldn’t be found in the road-book and consequently proved to be rather dangerous. Later, in the closing stages, we had to navigate a lot. Once we got lost as spectators were standing in our way and we weren’t sure where to go. But altogether, I’m really happy with our performance.” He now holds second position in the overall standings.

Holowczyc also had his problems – with his tyres and the imprecise road-book. “We got lost twice and suffered three punctures,” the Pole revealed in the bivouac. “And as we had run out of spare tyres, we had to back off and finished the stage at cruising speed.”

Tomorrow, in the stage taking the field from Chilecito to Tucuman, sand and heat will take centre stage. Throughout the session, the competitors will have to race off-road. According to hints of the organisers, this special stage is supposed to once again massively screen the field. Altogether, the drivers will cover 911 kilometres, 527 of them in the special stage. 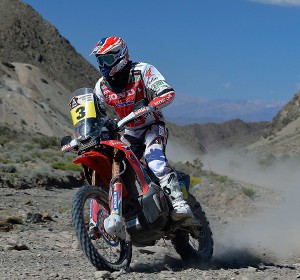 Fourth stage of the Rally Dakar 2014 and a tricky day for the TEAM HRC riders who fought hard to finish in favourable positions...
Copyright 2011-2016 Rallyraid.net - RISE Network. All Right Reserved.
Back to top