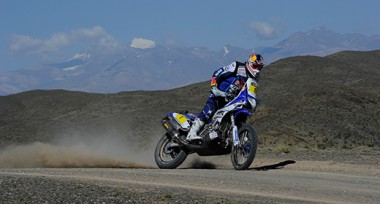 Another frustrating day today for Cyril Despres (Yamaha Factory Racing) with fuel problems forcing him to end his search for the elusive WP17 prematurely. He finally finished 18th on the day and is currently 8th overall. He will however receive an extra hour’s penalty later on this evening for the missing waypoint. Team-mate Michael Metge did manage to find the WP. Finishing 13th on the stage, Mika is 18th at 3h16’03.

“It was very hot in the special and the sand was soft. Because of that I was paying particular attention to engine temperature and even more so when I noticed I was consuming fuel at an alarming rate. I was on my way to get the famous WP17 but had to turn back when I realised I wouldn’t have enough fuel to make it to the end. I was right on the limit of running out when I came across a quad rider who kindly gave me a litre and a half. In all, my various problems cost me 44 minutes, to which will be added the one hour penalty…”

“After yestrday’s stage I started late this morning and suffered in the dust right at the beginning of the special. After that we got to the first set of dunes and I was pleased to find that, after the changes we’d made to my suspension, my bike handled much better than in the sand on the second stage. All of which meant I was able to attack the second lot of dunes in the camel grass with much more confidence and got past a fair few riders, to finish 13th on the stage. All in all, not a bad day.” 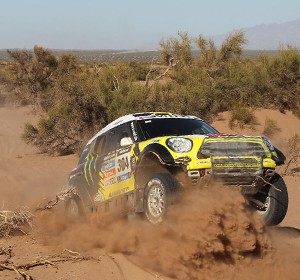 Day five, featuring the fifth stage from Chilecito to Tucuman, was a gruelling and first of all hot day for all the competitors....
Copyright 2011-2016 Rallyraid.net - RISE Network. All Right Reserved.
Back to top