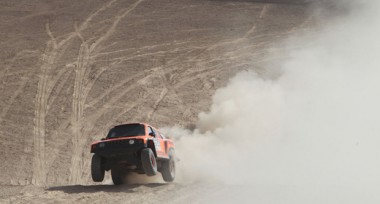 As the 36th Annual Dakar Rally continued into Chile Wednesday, Stage 10 brought competitors on a two part special from Iquique to Antofagasta.Tagged as one of the longest specials of this year comprising of a 58-kilometer liaison to a two-part 631-kilometer special encompassed with many challenging features along the shores of the Pacific Ocean. The American duo of Robby Gordon and co-driver Kellon Walch would navigate their SPEED Energy/Toyo Tires HST Gordini through the dunes for 200-kilometers, before taking on the extremely difficult sections of fesh-fesh to close the stage.

When the official results came in from Stage 9, Gordon was scored 28th. The SPEED Energy team opted to take a seeded driver’s provisional, allowing Gordon and Walch to start third in Wednesday’s stage. Starting in the top-twenty would allow Gordon to stay within reach of the leaders during the 631-kilometer special. As majority of the 2014 Rally Gordon would encounter a problem early in the stage, and lose valuable time within the first 100-kilometers. Dropping 54 minutes and 3 seconds behind the leader would become an extra challenge for the driver of SPEED Energy/ Toyo Tires HST Gordini. Narrow tracks and dust would now become difficult for Gordon to make a pass throughout the Stage. Team SPEED would cross the finish in the 20 position, 1 hour and 26 minutes behind Qatar driver, Nasser Al-Attiyah.

Gordon driving his SPEED Energy/Toyo Tires HST Gordini now sits in 22nd place overall, hoping to chip away in the rankings day by day. The competitors now head for the key stage of the rally bringing the few remaining drivers on a 605-kilometer challenge through the Atacama Desert en route to the town of El Salvador. This significant stage in the rally will give many competitors the opportunity to make up lost ground as the difficulty of the stage significantly increases with the special crossing over many river beds and the Dunes of Copiapo. If Gordon and Walch can make it over the obstacles without getting having issues, look for the team to have a top-ten finish increasing the overall standings. 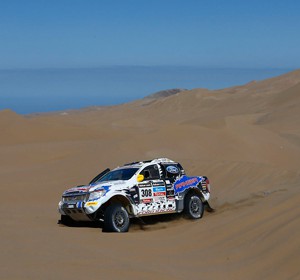 Lucio Alvarez and Ronnie Graue powered their Ford Ranger to ninth place in today’s 10th stage of the Dakar Rally from Iquique...
Copyright 2011-2016 Rallyraid.net - RISE Network. All Right Reserved.
Back to top