A discrete but emerging rider in the discipline up to today, Sam Sunderland made a grand entrance into the club of elite riders by brilliantly winning his first special stage on the Dakar. The provisional podium, still dominated by Barreda, boasts two Hondas. In the car category, Stéphane Peterhansel took control of the race, picking up his 62nd stage victory, following Carlos Sousa’s mishaps at the start of the special. In the truck race, Anton Shibalov won his first special stage, but Kamaz also lost one of their leading lights in Ayrat Mardeev. 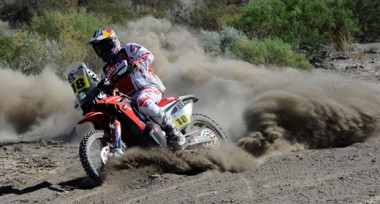 Sometimes promises come into being before they are actually made. Until today, Sam Sunderland had occasionally made an impact on various legs of the rally-raid world cup, by picking up respectable finishes and even some stage victories. However, to date, he has had a frustrating time on the Dakar, dropping out after three days of racing in 2012 and withdrawing a month before last year, due to fracturing both his wrists! Despite this double dose of bad luck, the Honda team did not hesitate to reserve him a bike for its ambitious Dakar programme. This inspired choice has been handsomely rewarded on only the rally’s second day, with his dazzling victory between San Luis and San Rafael. Having started well behind his team-mate, Joan Barreda, the 23-year old Englishman superbly overtook Michael Metgeand Juan Pedreroon the first part of the route. However, it was in the portion of dunes towards the end of the special that the resident of Dubai showed his youthful but confident and masterful experience of sand. On the finishing line he marvellously grabbed his first special stage victory, after only 4 days spent on the Dakar in total and can now claim to be a serious outsider for the podium… as long as he can maintain this excellent form and pace, as well as avoiding mistakes.

Joan Barreda did not make the slightest mistake either, today. Having opened the way, the Spaniard was not overawed by his status as race leader, keeping his pursuers at a distance before reaching the finishing line alone. His performance did not bring him the second stage win he was aiming for, due to Sunderland’s superb feat, but it was by no means disappointing, since Marc Coma lost several minutes as well as the second place in the general standings, whilst Cyril Despres dropped to 8th place in the overall hierarchy, 8’23’’ behind Barreda. In fact, the only current threat that intensified for the general standings leader today was that of Francisco “Chaleco” Lopez, who was the second quickest today, and the nearest challenger to the Spaniard, 2’03’’ behind.

It has not taken long for order to be re-established in the quad category. Yesterday, Marcos Patronelli was beaten by Ignacio Casale, a serious challenger for the title. However, the title holder soon took control of the race. The Argentinean flag-bearer arrived in San Luis with an extra line on his roll of honour: it was the 15th special stage victory on the Dakar for the Yamaha rider, who boasts a lead of 3’50” over his nearest rival, Lucas Bonetto. 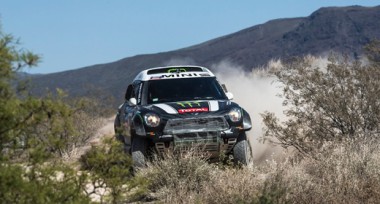 With the same type of authority, but significantly less room for manoeuvre, Stéphane Peterhansel took up the position of leader, conquered on completion of a stage driven with the requisite doses of calm and aggression! It was perhaps this control of pace that was lacking for yesterday’s winner Carlos Sousa, who ground to a halt after 33 km of the special, after breaking his turbo. The Portuguese driver, who is often among the most regular in the discipline, could paradoxically leave the race prematurely whilst having started the day in leading place. At the very least, between San Rafael and San Luis, he will have lost a considerable number of hours, robbing him of any hope of victory or even the podium in Valparaiso.

Whilst “Peter” regained his favourite place after two days of racing, the gaps have nonetheless shortened at the top of the general car standings, because the leader only has an advantage of half a minute over Carlos Sainz and his SMG buggy. Behind them, the top 5 is made up of three of Peterhansel’s X-Raid team-mates. The presence in 3rd of Nasser Al Attiyah (4’10” behind the Frenchman in the general), despite two flat tyres which obliged him to drive without a spare wheel for 100 kilometres, makes it likely that there will be one hell of a battle on the podium. The confrontation could still expand thanks to Nani Roma (4th, 4’19” behind “Peter”) or even Orly Terranova, still within less than 10 minutes of the general standings leader.

In the truck category, victory in the day’s special went to Kamaz’s Anton Shibalov, who won his first special stage in his first participation as a driver. However, the Russian team are finding it difficult to enjoy this success, since they lost Ayrat Mardeev (2nd last year), following a spectacular crash that forced him to drop out, and saw Eduard Nikolaev lose ten minutes, slowed down by electronic problems. The mishaps of the Kamaz team are a boost to Gerard De Rooy, 3rd on today’s stage and in the general standings, but especially to Marcel Van Vliet, who takes the lead in the category, 1’49” ahead of Shibalov. 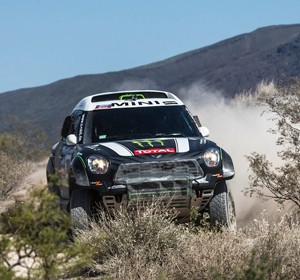 The two Frenchmen Stéphane Peterhansel and Jean-Paul Cottret in their black MINI ALL4 Racing gave the Monster Energy X-raid...
Copyright 2011-2016 Rallyraid.net - RISE Network. All Right Reserved.
Back to top