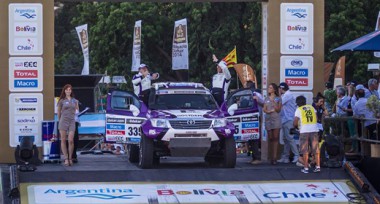 The Toyota Imperial South Africa Rally Team Toyota Hilux of Leeroy Poulter and Robert Howie held an excellent ninth position in the overall standings after the opening 180km special stage of the 36th Dakar Rally between Rosario and San Luis in Argentina on Sunday.

Six Toyota Hiluxes are also running under the Belgian Overdrive Racing banner and the Polish duo of Marek Dabrowski and Jacek Czachor lead the way in 16th overall after the tricky opening WRC-style special stage, which finished to the north east of San Luis. All six Overdrive Toyotas reached the stage finish without problems.

The fastest time of the day and the early rally lead fell to Portugal’s Carlos Sousa with a time of 2hr 20min 26sec in his Haval, but just six minutes separated the top 10.

Giniel de Villiers and Dirk von Zitzewitz lost around 10 minutes with power steering issues in the second of the Toyota Imperial South Africa Team Toyotas and the former Dakar winner holds 27th position in the overall rankings. Team-mate Poulter had been the fastest of all the drivers to the first passage control check point before slipping back to ninth at the stage finish.

“It could not have been a worse start for us. Our power steering failed after just 60km,” said De Villiers. “We had to stop three times to top up with oil until we ran out. It was the drive from hell for me. My arms were absolutely exhausted. We will try to gradually reel in the time we lost over the next few days, but it will not be easy.”

The Kazakh duo of Aidyn Rakhimbayev and Bauyrzhan Issabayev, partnered by their respective Russian and Kazakh co-drivers Vladimir Demyanenko and Gabdulla Ashimov, held 19th and 31st positions in their Overdrive-built Toyotas entered by Team Astana.

The Russian pairing of Leonid Ogorodnikov and Anton Nikolaev clocked a time of 2hrs 39min 37sec to reach San Luis in 33rd position in the sixth Overdrive car.

“It’s pleasing to get all our cars safely to the finish of the first stage without any problems,” said Overdrive team director Jean-Marc Fortin. “This is a long and difficult rally. No one can win the event on the first stage, but it is easy to make mistakes and lose it. I am quite happy with our position and that sets us up well for the coming days.”

One hundred and forty-seven cars joined 174 motorcycles, 40 quads and 60 trucks on the 405km road liaison section from the city of Rosario – which hosted the traditional start ceremony in front of hundreds of thousands of spectators on Saturday evening – to the start of the opening 180km special stage. Crews would then take a second link section to the overnight bivouac at San Luis.

This week the route of the 36th Dakar Rally winds its way through north-western Argentina with stopovers in San Rafael, San Juan and Chilecito before heading towards Tucuman and on to Salta, which hosts the rest day for the first time on January 11th. 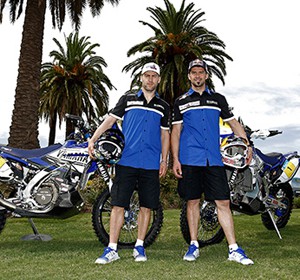 On the eve of the start of the 2014 Dakar the bikes have passed through technical scrutineering and are safely in the parc...
Copyright 2011-2016 Rallyraid.net - RISE Network. All Right Reserved.
Back to top