Red Bull KTM Factory riders Chaleco Lopez of Chile and Spain’s Marc Coma had a good day out in Stage 4 of the Dakar 2014, finishing 2-3 in the stage. Coma has moved up to second overall and trails by only 3 minutes 10 and Lopez is in third overall, 5.12 behind the leader.

As predicted, the second half of the first marathon stage was a matter of survival as riders nursed their bikes home after no mechanical assistance and no fresh tires overnight. 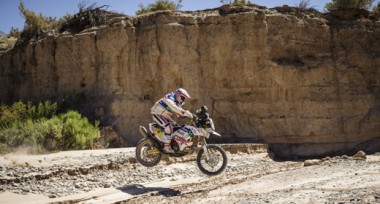 Lopez had a great day, finishing only 29 seconds behind the stage winner, Joan Pedrero. Coma, who is bidding for his fourth Dakar title, trimmed the gap to overall leader, Barreda of Spain, to just 3 minutes 10 seconds.

Lopez commented briefly at the end of his stage: ‘Stone, river, stone – a very technical route but my tires were good enough”. Coma also said it was “a long and tough day”.

Factory teammate Jordi Viladoms was eleventh on Wednesday and is ninth in the overall standings some 40 minutes 14 behind the leader. The fourth team member, Ruben Faria of Portugal crashed in Tuesday’s stage and is out of the race.

KTM Factory Team Manager Alex Doringer was a happy man after Stage Four: “The bike and our riders did a fantastic job. Both days of the marathon were very intense. Marc and Chaleco did a fantastic marathon,” he commented. The factory riders are competing on the brand new KTM 450 RALLY bike.

KTM-supported rider Kuba Przygonski of Poland is currently overall tenth and Riaan van Niekerk of South Africa is twenty-second after a long day. He lost two hours in the stage through navigational issues. Australia’s Ben Grabham crashed and is also out.

The marathon stage proved to be an early shakeout and while anything is possible in the Dakar, a handful of riders now seem to be in command of the overall standings. Only the top five are within half an hour of the leader and Coma and Lopez are well placed in this group.

Riders still have to face a second marathon stage after they enter Bolivia for the first time after Saturday’s rest day, and there are still the many kilometers of desert riding in Chile before they reach the finish in Valparaiso.

The stage took riders from San Juan to Chilecito over 210 km liaison and a timed special of 353 km for a total of 563 km. Navigation played an important part in the first part and above all, riders had to nurse their tires, already badly worn from the previous day, through the entire day.

They now have to tackle another very long timed special on Thursday. They face 527 km under the clock and the longest stage in terms of distance – 911 km – as they make their way from Chilecito to Tucuman. The timed special is in two parts and much of it is in the sand. Riders will also have to deal with high temperatures. 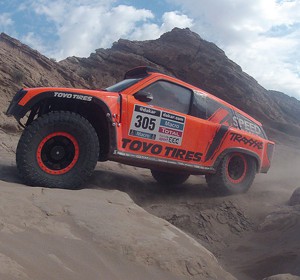 After one of the longest stages of the 2014 Dakar Rally, SPEED Energy/Toyo Tires driver Robby Gordon finished the fourth...
Copyright 2011-2016 Rallyraid.net - RISE Network. All Right Reserved.
Back to top