A rugged road trip along the coastline of the Pacific Ocean was the latest challenge at the Dakar.

All four categories were plunged into a 450km timed special stage as the 2014 Dakar Rally headed south from Iquique to Antofagasta via the Atacama Desert. Hazardous sand traps littered the route with the soft powdery fesh fesh waiting to throw a spanner in the works. 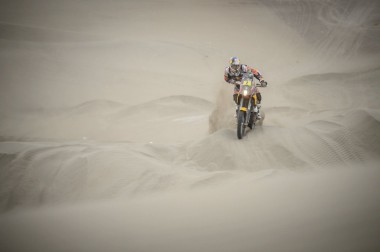 It was the bikers that led the way onto the dunes and it was some big names with plenty to prove that took control. There was a significant move up the overall rankings for Cyril Despres as he hunts down a podium finish to compensate for a tough first week in South America. The five-time Dakar champion took 3rd on the stage to move into 6th overall

Also pushing for a place in top 3 is Portugal’s Helder Rodrigues who finished as runner-up on Stage Ten behind Joan Barreda. Rodrigues is now up to 5th in the general rankings and has a third Dakar podium finish in his sights.

Marc Coma is still looking comfortable at the head of the race with a lead of over 40 mins from Barreda in second.

In the car category it was Nasser Al-Attiyah who enjoyed the strongest day on Stage 10. Another former Dakar champ on the pace was South Africa’s Giniel de Villiers who arrived in the bivouac at Antofagasta with the fourth quickest time of the day. Giniel and co-driver Dirk von Zitzewitz remain within touching distance of a 3rd consecutive podium finish at the Dakar.

Elsewhere in the car race the Red Bull SMG Rally Team duo of Carlos Sainz and co-driver Timo Gottschalk saw their Dakar adventure end early. During the neutralisation section of the stage the pair were caught out by a sharp turn that saw their Buggy roll out of the contest. 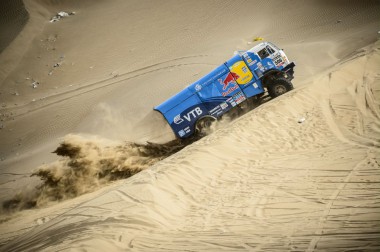 The charge of Andrey Karginov behind the wheel of his Team Kamaz Master truck continued on Stage Ten as he once again cut the deficit between himself and general ranking leader Gerard De Rooy. The gap between De Rooy and Karginov is now less than eight minutes as the Russian stays on the hunt.

Cyril Despres #1 – Yamaha Factory Racing: “It was like riding through a maze this morning with all the dunes and valleys. I caught with Marc after 14km and we ended up riding together all day long, the rest never caught up with us. We went fast which was good for me in the overall rankings. Today’s result moves me back up the classification. I don’t know how far I’ll get but I’m trying.”

Helder Rodrigues #7 – HRC Rally: “I tried to push really, really hard and it turned out well. I passed the dunes and saw only two tracks in front, Cyril and Marc. I kept trying to gain on them until Joan caught up with me. In the end Joan took the stage and I was second. That’s a really good result for Honda and for me as well so I’m pleased.”

Marc Coma #2 – Red Bull KTM Factory Team: “This race is not over yet. If we start to think like that we’re going in the wrong direction. We have to stay focused all the time. We have two very tough days, especially tomorrow. It is 600km and the longest special of the rally. Everything is still possible.”

Andrey Karginov #506 – Team Kamaz Master: “We knew today’s special was important because it featured lots of big dunes over a 70km stretch and this is good terrain for us. Even so it was a difficult day because I spent the entire day up front and we had to use our navigation skills. We couldn’t just simply follow the car tracks because we were on a different course. We got through okay and I was able to put on the afterburners in the second special which was much faster.” 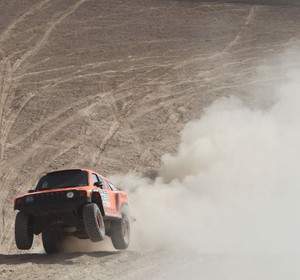 As the 36th Annual Dakar Rally continued into Chile Wednesday, Stage 10 brought competitors on a two part special from Iquique...
Copyright 2011-2016 Rallyraid.net - RISE Network. All Right Reserved.
Back to top