The party atmosphere of the pre-race Podium presentation gave way to the serious business of racing as Stage One of the 2014 Dakar Rally was contested on the route from Rosario to San Luis.

It was an especially early start for the bikers as they set off to find the stage at 4am. Leading the two-wheel competitors onto the track was five-time champion Cyril Despres.

On a technical stage with special focus on balance and braking over 180km of loose, stony ground there were a clutch of bikers looking to make an early impression. Cyril and Marc Coma lost no time in renewing their own rivalry that has seen the pair win the last eight editions of the Dakar.

As Cyril and Marc battled it out through the seemingly limitless number of corners on the stage they were passed in the standings by the Honda of overall stage winner Joan Barreda. With less than two minutes separating these top three bikers the story of which contenders will be fighting for the bike title this year seems to have already unfolded.

Another dark horse emerged in the car race as Carlos Sousa took top honours on the opening day of racing. The Portuguese driver led home a string of former Dakar champions including Carlos Sainz. On a stage that favoured the four-wheel drive cars in the race it was the Red Bull SMG Buggy of Carlos Sainz that was the first two-wheel drive vehicle over the line and kept El Matador in touch with the lead.

A day of unexpected heroes at the Dakar did not continue in the truck race with Team Kamaz Master’s Ayrat Mardeev, last year’s overall runner-up, winning Stage One. Ayrat’s Kamaz team-mate Eduard Nikolaev, last year’s winner, is also well placed after a fifth place finish on the opening stage. 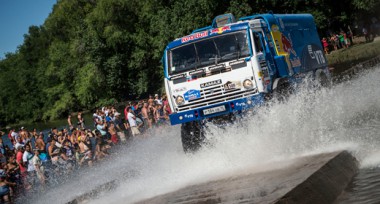 The rally-raid action now comes thick and fast with another punishing 750km to be negotiated between San Luis and San Rafael on Monday. The grey dunes of Nihuil will be the first taste of sand for the competitors at the 2014 Dakar Rally.

Cyril Despres #1 – Yamaha Factory Racing: “It was a nice feeling this morning to jump on the Yamaha for the first time at the Dakar. Starting with plate #1 is always a pleasure. It was just 180km today but it was still a very demanding stage. We had to go hard on the brakes, the clutch and the throttle. We had to work hard on this stage but you always expect that at the Dakar. I’m glad to be back at the race and to have another safe day, that’s important.”

Marc Coma #2 – Red Bull KTM Factory Team: “The first day is never easy and today was no different. It was extremely slippery so maintaining the line was very difficult. To begin with I took it easy and then after some kilometres the feeling came back. I was feeling very comfortable and I was able to push a little bit.”

Marcos Patronelli #250 – Yamaha Racing Argentina: “It wasn’t my favourite kind of stage today because it was necessary to work hard from start to finish with no time to relax at all. The corners were made extra complicated because of the loose stones throughout the stage. In these conditions it’s tough to find any kind of rhythm. There’s nobody with a big lead at this point of the race so everything is still to play for.”

Carlos Sainz #303 – Red Bull SMG Rally Team: “The stage was very slow today and that doesn’t really suit me. I’m glad to get a day at the Dakar finished without any problems for the car. Today was not the best conditions for our Buggy and we’re looking forward to the sand tomorrow.” 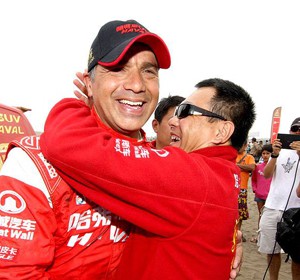 Everyone expected the motorcycle competition to be wide open, and that is indeed what the classification shows after the opening...
Copyright 2011-2016 Rallyraid.net - RISE Network. All Right Reserved.
Back to top