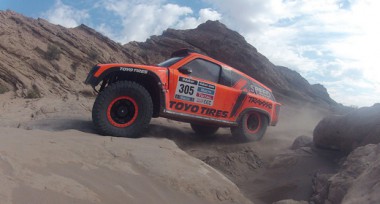 After one of the longest stages of the 2014 Dakar Rally, SPEED Energy/Toyo Tires driver Robby Gordon finished the fourth Stage with a solid fourteenth-place for the HST Gordini.

Competitors started the Stage on a 211-kilometer liaison, which led to a grueling 657-kilometer Special through the mountains and countryside of Argentina. To the benefit of competitors a neutral zone was designated in the middle portion of the Stage for cars to be serviced before finishing the final kilometers. Sitting in a comfortable sixth place just 9 minutes and 32 seconds back entering the neutral zone, Gordon and co-driver Kellon Walch knew they would need to finish the special without any problems to have a shot at capturing the team’s first top-five of 2014.

After the neutral zone, the SPEED Energy/Toyo Tires HST Gordini went back on the move and was able advance one position into fifth, and remain consistent until the final few kilometers when three competitors were able to pass Gordon. Overall standings will not be posted until more cars cross the finish line. With many teams having issues the last two stages, the team hopes to make a jump in the overall standings. Still many hours behind leader Carlos Sainz, but anything can happen in the Dakar Rally, the toughest off-road race in the world.

Thursday we be another shot for Gordon to get his first stage win of 2014 as he will start mid pack and tackle another long stage of the Rally with a 384-kilometer liaison leading to a 527-kilometer Special. The Stage will primarily feature a plethora of sand, and the Gordini will experience the hottest temperatures of the race and all teams will face a true test of not allowing engines to overheat. Gordon and Walch will need to conserve equipment through this long Special, but yet be aggressive trying to cut into the 4 hour and 16 minute lead of Spaniard Carlos Sainz. 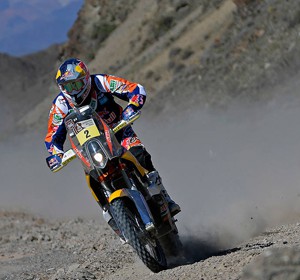