A series of problems puts a dent in Carlos Sainz’s ambition to recapture his Dakar title.

Buoyed by yesterday’s stage victory it was the Red Bull SMG Buggy containing Carlos Sainz and co-driver Timo Gottschalk that opened the road to Tucuman for Stage Five of the 2014 Dakar Rally.

An omen of the events to come occurred early on the stage when Carlos and Timo got stuck in the soft sand that characterised the terrain on day five. After digging themselves out of trouble the pair of former Dakar champions were soon back to race pace and hunting down the minutes they had lost during this brief stoppage. 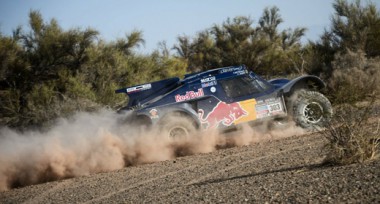 However, things were to take another turn for the worse when confusion descended on the car race surrounding a waypoint at the 163km point of the timed special stage. Carlos and a group of leading cars drove themselves in circles as they searched for this elusive waypoint.

The quest to track down the waypoint was further complicated by engine trouble that brought Buggy #303 to a standstill for 50 minutes. When the duo at the controls had got their motor running once again they decided on a course of action to skip the waypoint and drive on.

The time lost during stoppages plus an hour penalty for missing the waypoint saw Carlos surrender his first place in the overall classifications held at the beginning of the day. Carlos and Timo finished Stage Five in 28th place and are out to 8th position in the general ranking of the car race.

The silver lining after a tough day of racing was the 15 minutes Carlos and Timo were able to catch on race leader Nani Roma during the final 150km of the stage. During this passage of play we saw them utilise the pace and power that exists within the Buggy as they showed a determination to claw back time.

Carlos and Timo’s team-mates Ronan Chabot and Gilles Pillot were able to overcome their own mix of trouble and strife to also end the day on a positive note. Ronan and Gilles came though the soft sand and camel grass in Buggy #312 to finish the stage in 12th position, moving up a place to 24th in the overall standings.

With the Rest Day waiting at the end of tomorrow’s Stage Six the team will be hoping for an upturn in fortunes along the maze of mountain ridges, valleys and riverbeds between Tucuman and Salta. 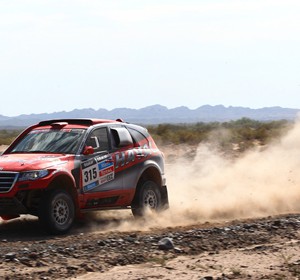 As a result of extreme temperatures, the organisers of the Dakar rally decided to shorten the lengthy Stage 5 by about 100 km due to safety...
Copyright 2011-2016 Rallyraid.net - RISE Network. All Right Reserved.
Back to top