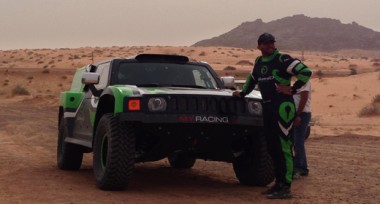 The Riyadh-based driver will team up with French navigator Alex Winocq and is set to drive his ex-Robbie Gordon Hummer for the first time on a cross-country event since he sustained a serious back injury whilst leading last year’s Ha’il Rally in the north of the Kingdom of Saudi Arabia.

It took time for the Saudi and his co-driver to recover full fitness, but Al-Rajhi has since competed in several WRC events and is relishing the challenge of winning the new Jeddah-based rally for the first time. “I won the Ha’il Rally three times – in a Nissan, a Mitsubishi and a Mini – and now I want to try and win the Jeddah Rally with the Hummer,” said the Yazeed Racing Team star.

The entry list for the inaugural event is still provisional, but features an impressive list of Saudi Arabian, Qatari and Emirati drivers and co-drivers in a variety of T1 and T2 machinery. It will be held under the patronage of H.R.H. Prince Khalid Al-Faisal, Governor of the Mecca region, and H.R.H. Mishaal Bin Majed Bin Abdul Aziz, Governor of Jeddah and head of the Jeddah Rally’s Higher Organising Committee, the three-day Rally Jeddah.

“We will exert all efforts to make this event a success and to make it unique in compliance with the royal directives and the close co-operation shown by the participating committees, governmental departments and the private sector,” said Bakhashab. “This is a golden opportunity for racing lovers to enjoy watching the spectator stage at Sharm Obhour and the two legs in the Khplais Governorate.”

Ihab Allam of MYN Motors added: “We have provided the rally with many models that are technically equipped to tackle the rigours of the desert, including the all-new Land Rover, Land Rover LR4 and Range Rover Sport. The Sport was the first car that succeeded in crossing the Empty Quarter in a record time.”

Meanwhile, the organising committee have appointed the experienced Ulsterman Malcolm Neill as clerk of the course for the new rally. He formerly worked in a similar role at the Lombard RAC and Circuit of Ireland rallies in the United Kingdom. Neill has also worked on WRC candidate events in Turkey and Canada and on both the Qatar and Oman rounds of the FIA Middle East rally championship. A former chief organiser of Britain’s Rally Show, Neill is also the deputy clerk of the course of Rally Mexico, round three of this year’s FIA World Rally Championship.

Motorcyclists will also be permitted to race for the first time in their own event running under the auspices of the FIM. Five Saudi riders appear on the provisional entry list, with Abdulaziz Al-Hathlul and Abdulmajeed Al-Khulafi riding a pair of Honda 450s, Hamad Al-Hdayan wheeling out a Yamaha, Sultan Al-Masood taking the saddle of a Suzuki and Nadir Khayat sitting aboard a Yamaha Raptor quad.

The event is being organised with the support of the Higher Committee of the Jeddah Rally which incorporates the General Presidency of Youth Welfare, Jeddah Municipality, the Jeddah Chamber of Commerce and Industry, the Saudi Commission for Tourism and Antiques in the Mecca region, a branch of the Saudi Red Crescent in Mecca, the Jeddah Police and Traffic Departments and Civil Defence Administration in Jeddah. 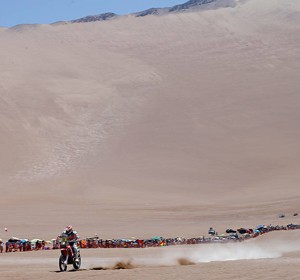 The Dakar saw a navigation heavy stage which passed through many kinds of terrain and put the rider’s skill at using the roadbook...
Copyright 2011-2016 Rallyraid.net - RISE Network. All Right Reserved.
Back to top