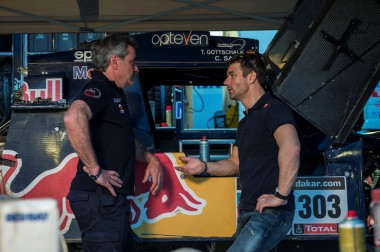 The most successful driver in WRC history came to congratulate some friends on reaching the midway point of the toughest rally-raid on the planet.

Sébastien Loeb’s retirement from the WRC following nine consecutive titles has seen him travelling the globe in search of what else motorsport has to offer. He recently smashed the record at the Pikes Peak International Hill Climb and is currently getting in gear for the 2014 FIA World Touring Car Championship.

Amid this chaotic schedule Sébastien is currently living out a long-term ambition by paying a visit to the Dakar Rally. The Frenchman arrived on the eve of the Rest Day in Salta and dropped in on a few old friends.

However, before the likes of Carlos Sainz and Cyril Despres could catch up with Sébastien, there was the small matter of Stage Six to be completed. 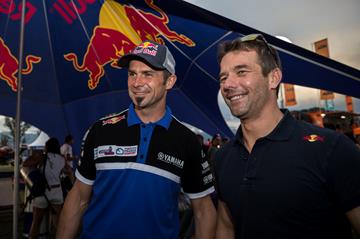 On a short and sweet truck stage measuring 156km there was little chance for Team Kamaz Master to launch a full-scale attack on race leader Gerard De Rooy. The Russians instead used a tactic of making small gains on Stage Six with second placed Andrey Karginov poised to make his move in the second week along with team-mate Eduard Nikolaev.

In the car race Giniel de Villiers kept up his charge for a podium finish with fourth place on Stage Six that puts the South Africa fourth in the overall classification. Also fighting hard was Carlos Sainz who managed to put yesterday’s series of problems behind him to finish fifth on the stage. The result puts the former Dakar champion sixth overall heading into the second week of the desert classic.

On the bikes we saw Honda HRC’s Helder Rodrigues continue to find his rhythm. The Portuguese biker was sixth on Stage Six and now sits 8th in the general classification while race leader Marc Coma strengthened his position with runners-up spot on the stage. Marc and Helder were joined in the top 10 on Stage Six by fellow Red Bull Desert Wings Michael Metge, Cyril Despres, Kuba Przygonski and Jordi Viladoms.

Chaleco Lopez started the day third overall in bikes before seeing his 2014 Dakar Rally come to an end on Stage Six. The Red Bull KTM Factory Team rider was unable to start his bike after a fall on the stage and was taken by helicopter back to the bivouac with minor injuries. 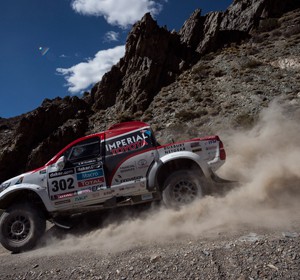 Poles Dabrowski and Malysz in seventh and ninth with Overdrive Toyotas Kazakhs Rakhimbayev aims for solid second half...
Copyright 2011-2016 Rallyraid.net - RISE Network. All Right Reserved.
Back to top