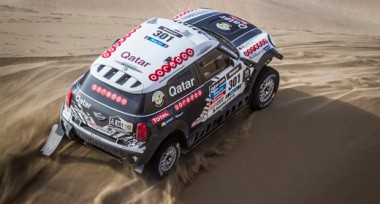 In the 10th stage, from Iquique to Antofagasta, Nasser Al-Attiyah (QAT) and Stéphane Peterhansel (FRA) once again were the only two drivers battling it out for the win, with Al-Attiyah and his Spanish co-driver Lucas Cruz in the white MINI ALL4 Racing getting the upper hand, this time, and securing their second stage win in the 2014 Dakar. Stéphane Peterhansel and Jean-Paul Cottret (FRA) in the black MINI ALL4 Racing finished second, 3:50 minutes behind the stage winners. The Spanish-French pairing Nani Roma / Michel Périn set the third fastest time and defended the fist position in the overall standings – with their lead over Peterhansel amounting to just 2:15 minutes, now! Krzysztof Holowczyc (POL) / Konstantin Zhiltsov (RUS) took their red MINI ALL4 Racing to fifth position and Orlando Terranova (ARG) / Paulo Fiúza (POR), racing the orange MINI ALL4 Racing, came seventh.

By winning today’s stage, Al-Attiyah worked his way up to third position in the overall standings. “This was a really good day or us,” he said. “I’m really happy that we made it to third position, today – that’s cool. But I’ll keep on pushing, tomorrow. After all, the Dakar is far from being over.”

Having won yesterday’s stage, Peterhansel was the first to start into today’s. “Doing so in the dunes of Iquique wasn’t too easy but we made it,” said the Frenchman. “In the second part of the special stage, however, Nasser was able to close in on us. So I stopped for some seconds to let him pass.” In the overall standings, Peterhansel’s gap to his leading team-mate Roma amounts to just 2:15 minutes, now. “Since Salta, things are running well for us and we are gaining several minutes every day.” 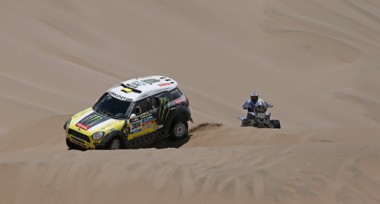 For Roma, however, things didn’t run that smoothly. “I had a puncture in the closing stages of part one but made it to the finish without a tyre change,” he revealed. “Later I got stuck in the dunes. Unfortunately, we weren’t able to contest the special stages of the past days without making mistakes. In the first week, others had problems and now it’s my turn. But I will try hard to defend my lead on the final days.”

Like many others, Holowczyc had navigation problems, today. “In the early stages we passed Malysz and a Kamaz”, said the Pole. “But then we began to look for a waypoint. There were at least five cars circling, there. We were the first to find the waypoint and continued right away.” In the overall standings, he still holds the safe sixth place.
Meanwhile, Terranova encountered a bad day, today. “We just made too many mistakes,” the Argentinean angrily admitted. “No major mistakes but we again and again lost several minutes.” Over the course of today’s special stage, he lost about 30 minutes compared to Al-Attiyah, thus dropping back to fifth position in the overall rankings – 20 seconds behind Giniel de Villiers.

Slowly but surely, the 2014 Dakar is entering the finish straight. Tomorrow, the teams will contest the 11th of the 13 stages. On the way Antofagasta to El Salvador, the competitors will cover 749 kilometres, featuring a 605-kilometre special stage. At the beginning, the route will take the field across tracks and river beds – and then into Atacama Desert and the dunes of Copiapo. According to the organisers, the teams will need more than six hours to contest the stage! 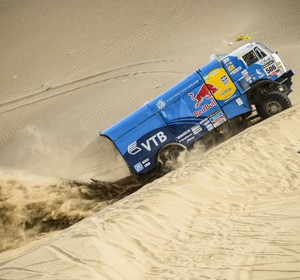 A rugged road trip along the coastline of the Pacific Ocean was the latest challenge at the Dakar. All four categories...
Copyright 2011-2016 Rallyraid.net - RISE Network. All Right Reserved.
Back to top