Stage 6 did not get any easier for Gordon 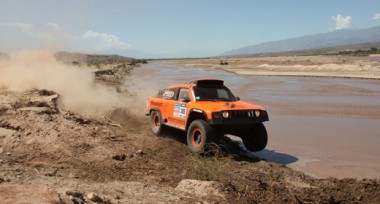 Coming off Thursday’s Stage 5 – one that Robby Gordon described as the most difficult he had faced in nine previous years of the Dakar Rally, Stage 6 did not get any easier for Gordon and his SPEED Energy/Toyo Tires team.

After finishing in a podium position the first time in 2014 after Stage 5, Team SPEED would receive news of a one-hour penalty that was applied following Stage 5 for missing a waypoint, thus forcing Gordon to forgo the third starting position for Friday’s Stage 6.

Gordon started as the 25 car off the line, making his objective for the Stage to pass as many cars as he could without jeopardizing the HST Gordini before Saturday’s scheduled rest day.

Picking cars off one-by-one, Gordon quickly found himself in the top-15 after the first checkpoints, but shortly he put the SPEED Energy/Toyo Tires HST Gordini into conservation mode for the rest of the Stage, as the heat of the South American desert caused engine temperatures to rise.

Gordon and Co-Driver Kellon Walch would cross the finish at kilometer 424 as the 21car, 24 minutes 26 seconds behind stage winner Stephen Peterhansel of France.

Tomorrow is Rest Day where competitors are given a day to relax and prepare their cars for the final seven days of this year’s Dakar Rally. The SPEED Energy/Toyo Tires Team will be very busy prepping and making changes to secure their chances at a Stage victories. 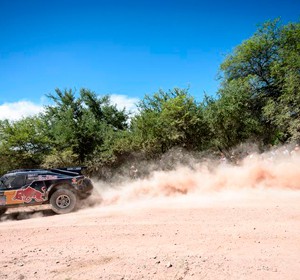 The rally racing legend put yesterday’s troubles behind him to come out fighting on the trail towards Tucuman. Carlos...
Copyright 2011-2016 Rallyraid.net - RISE Network. All Right Reserved.
Back to top