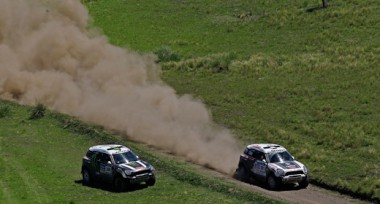 It was a very good start into the 2014 Dakar Rally, for the Monster Energy X-raid Team and the X-raid Team. Together with his Portuguese co-driver Paulo Fiúza, Argentinean Orlando Terranova took his orange MINI All4 Racing to second place behind Carlos Sousa (Haval), in stage one. And with Nasser Al-Attiyah (QAT) / Lucas Cruz (ESP) and Nani Roma (ESP) / Michel Périn (FRA), two other MINI ALL4 Racing teams finished third and fourth respectively.

The two Frenchmen Stéphane Peterhansel and Jean-Paul Cottret in their black MINI ALL4 Racing lost some time due to a puncture, came sixth – and crossed the finish line in exactly the same time as Krzysztof Holowczyc (POL) and Konstantin Zhiltsov (RUS) in the red MINI ALL4 Racing.

The frustration due to the fact that the team failed to win stage one was limited. After all, no driver who was the fastest in the car category on day one succeeded in winning the Dakar, in recent years. By finishing second, Terranova proved to be the fastest Monster Energy X-raid driver. “The track resembled a WRC stage a lot – it was tight and twisting. So, making mistakes was easy,” said the Argentinean. “But with 40 kilometres covered I found a good rhythm and started to push. Definitely the right decision.”

For Al-Attiyah, it was the first time he drove the MINI ALL4 Racing in anger – and he came third. “I took it easy to day to familiarise myself even better with the MINI,” said Al-Attiyah. Some 30 seconds behind the driver from Qatar, Spain’s Nani Roma finished fourth and proved to be happy with this result. “This was a good start into the Dakar,” he said. “Unfortunately I had to drive some 60 kilometres in the dust of Carlos Sainz, thus losing some time. Otherwise, we possibly could have achieved an even better result.” 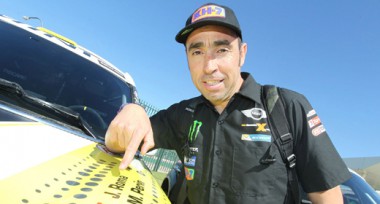 For quite a while, Peterhansel seemed to be on the way to winning stage one but then, a slow puncture cost him valuable time. “With just 30 more kilometres to go, the rear of the car handled more and more nervously and when the vehicle was nearly uncontrollable, we changed the tyre,” the Frenchman said in the bivouac. “Then, I rejoined the action ahead of Nasser. But when he used his sentinel I let him pass.” Just as Roma, Holowczyc also lost time in the dust of an opponent. “But I didn’t want to take any risks,” admitted the Pole. “It’s day one today and a lot of things can happen.” 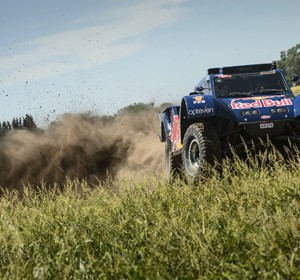 The 2010 Dakar Rally champion is out to reclaim his title following a tough opening stage that proved to be bittersweet for the Red Bull...
Copyright 2011-2016 Rallyraid.net - RISE Network. All Right Reserved.
Back to top