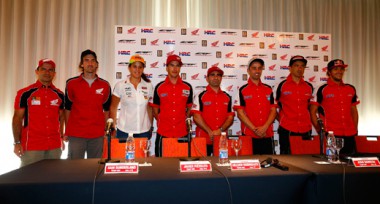 Rosario played host today to the presentation of the official teams, with Honda and TEAM HRC introducing the team that will represent them in the 2014 edition of the Rally Dakar. With the administrative and technical checks out of the way, the teams can begin the competition tomorrow Sunday 5th January.

It will be the city center of Rosario, Argentina where the Rally Dakar 2014 sets out from, and where today the press conference and the presentation of the official Honda teams took place. Honda will be represented by; Honda Argentina Rally Team, with Argentinian rider Pablo ‘Cacha’ Rodríguez and Spanish rider Laia Sanz; Honda Racing Brazil Rally Team, including Brazilian Jean De Azevedo, as well as TEAM HRC, with Spaniard Joan Barreda, Portuguese riders Hélder Rodrigues and Paulo Gonçalves, Argentine Javier Pizzolito and British rider Sam Sunderland.

Also present at the event was the management team, with team director Katsumi Yamazaki and general manager Martino Bianchi, as well as vice-chairman of HRC, Shuhei Nakamoto; the Motorsports manager de Honda Racing, Hiroyuki Fujiwara; CEO of Honda Argentina, Noboyuki Kaji and marketing manager of Honda Argentina, Federico Vahle, who stated, “The challenge and competitive spirit are two of main values of the Honda brand. As Honda Argentina, we cannot stay on the side-lines of such an event, especially one that takes place on home soil in Argentina”. 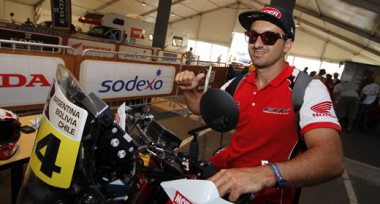 Yesterday saw the administrative checks and technical tests, before the first stage of the Rally Dakar 2014 sets out tomorrow at 04.20 hrs from Rosario in direction San Luís.

Dakar is the most prestigious and toughest off-road motorcycle race in the world. An exceptional work-bench for the bike, which in turn will become tomorrow’s mass-production model. Last year we entered Dakar with a factory team in order to gain experience and develop a completely new bike.
For Dakar 14, HRC produced a complete new machine, the CRF 450 Rally that will be ridden by five factory riders. The bike was tested with success in Morocco and Merzouga rally, where TEAM HRC won both events. We believe we now have the best riders, machines and a team structure that is capable of winning the Dakar. The new bike will be in production in 2014 for the enthusiasts of motorcycle rally and adventure competitions. Thanks you for your support and enjoy the race!

It  has been six month of intensive work. We now all know we have done our best in order to be ready to fight for a great result in this Dakar. A big team with thirty members from twelve different nationalities ready to join together in the world’s most fantastic race. Our five riders are a blend of everything: riding skills, speed, strategy, water-carriers, world champions, and youthful passion. We have a great mixture of everything. We are very proud of our team and of all the effort that has been made up until now. Now let’s start the Dakar, and I’d like to offer all my best wishes to all our team members for a safe race, and don’t lose passion at any time in the race. Passion is what keep us alive in all our daily lives. Thanks to all, and enjoy the race 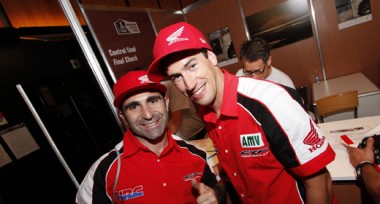 I want to thank Honda for having faith in me for this, my second Dakar and for all the work done over the year. The whole team has worked really hard on the bike. The bike is brand new and has been put together piece by piece to improve all aspects of it.

The pressure is building. I couldn’t ask for a better bike; I’m really happy with my four team-mates and our aim is to fight for any podium place; preferably the highest one possible!

I’d like to thank HRC for giving me this chance to compete for Honda on this great bike. We won the first race as well as the World Championship thanks to the great teamwork. We know that it is a very solid base that we are building on, and with a fine team of riders. We believe in the team. The Dakar is tough and this one in particular will be, because it is longer and more difficult than all the others in South America, and altitude could be a factor that complicates the race.

There might be a bit of pressure, because we are really up for the big challenge of getting a victory at the Rally Dakar. We will be fighting against people with a lot of experience, who have dominated the raids in recent years. All of us riders in the TEAM HRC will fight nail and tooth to achieve the team objective, which is to win the race.

The competitors will wake up early to set off along the road in the region of Cordoba and start the race on some narrow tracks which will require the utmost vigilance. Each one will still be very fresh allowing them to tackle the stony sections or the blind jumps serenely. The competitors’ driving skills will be rewarded at the finish, where they will have already clocked up 800 kilometres. Although the gaps will not be significant at this stage of the race, it is nevertheless important to maintain their position in the part of the standings that they are aiming for! 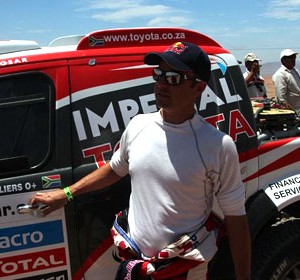 Overdrive Racing will field six Toyota Hiluxes in the 36th Dakar Rally which starts in the Argentine city of Rosario on Saturday...
Copyright 2011-2016 Rallyraid.net - RISE Network. All Right Reserved.
Back to top