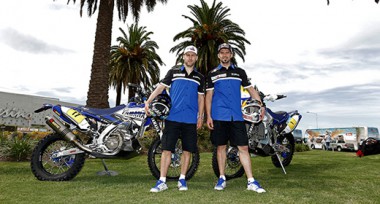 On the eve of the start of the 2014 Dakar the bikes have passed through technical scrutineering and are safely in the parc ferme. All that remains is the organiser’s general briefing and the traditional ‘family’ photo of the motorcycle competitors before they set off for the first 809 kilometre stage from Rosario to San Luis and its ‘short’ 180 kilometre special.

“We’ve been here for six days now, first in Buenos Aires, where we were received like royalty by Yamaha Argentina and now in Rosario where the rally start is situated. In that time we’ve tested the bikes twice, packed the trucks, organised the camping car and done a couple of hundred interviews. I might be exaggerating slightly concerning the interviews, but not by much! And now we’re ready to go. Of course, with so many official teams and riders present this year the media have whipped themselves up into a frenzy trying to predict the result. Personally, with 9209 kilometres between here and the finish I’m slightly more reluctant to announce the final result 15 days ahead of time! What I do know is that, as always, I will be giving it absolutely everything I’ve got – and a little bit more.”

“On the eve of my second Dakar I’m happy to say I feel considerably more prepared than in 2013! The bike has made a lot of progress in that time and I have learnt a great deal in Cyril’s company. The fact that I am his support rider this year also takes the pressure off a little. There’ll be quite a few competitors out there who’ll be riding at 100% of their capabilities, but not me. My job in 2014 is to be there for Cyril if he needs me so I don’t have to worry too much about my overall position.”

“The days before the race gets underway are always a little long but for us, in our new configuration, they have been useful. Over the last few days the complicity among the different members of the team has grown and the atmosphere is excellent, ‘the mayonnaise has taken’, as we say in French! With Cyril on board this year our ambitions are clearly greater and we are all really looking forward to the challenge of fighting for the victory.” 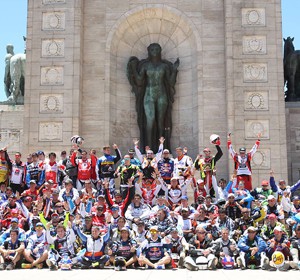 The drivers and riders participating in the Dakar spent three days going through the technical and administrative scrutineering...
Copyright 2011-2016 Rallyraid.net - RISE Network. All Right Reserved.
Back to top