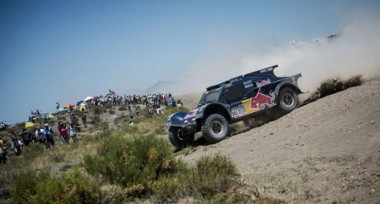 Carlos Sainz and Ronan Chabot both found the biting point of their Buggies during a successful second stage of the 2014 Dakar Rally.

The Buggies of the Red Bull SMG Rally Team quickly discovered their racing rhythm on the grey dunes of El Nihuil as both Carlos Sainz and Ronan Chabot propelled themselves up the leaderboard.

Carlos and co-driver Timo Gottschalk started the second day of the Dakar Rally as the fifth car onto the stage but they soon found themselves at the front of the pack after passing their rivals.

A fast track in the early part of the stage allowed Buggy #303 to quicken the race pace before the pair of former Dakar winners later dominated the dunes of El Nihuil at the conclusion of the day.

Also making up time was Buggy #312, containing Ronan Chabot and co-driver Gilles Pillot. The Frenchmen sped through the first sandy section of this year’s Dakar as they overtook a dozen cars on the route from San Luis to San Rafael.

The second place result on Stage Two sees Carlos Sainz as runner-up in the overall standings with less than half a minute separating himself and race leader Stephane Peterhansel.  Meanwhile, Ronan Chabot put his problems on the first stage behind him to record a seventh place finish to rejoin the business end of the race.

It was sand on the menu today but it will be mountains tomorrow as the Dakar travels through the foothills of the Andes. In the shadow of the mighty Aconcagua, the Red Bull SMG Rally Team will drive their Buggies along perilous mountain ridges on Stage Three.

Carlos Sainz #303 Driver – Red Bull SMG Rally Team: “We knew that today’s stage would be different from yesterday and that fits in with our approach of taking the rally day-by-day. We understood that it would be a much quicker stage and it was a matter of maintaining a good speed. We tried hard and we passed everyone in front of us to find ourselves opening the road. We’re happy that the Buggy is driving well and we are very well placed in the standings.”

Timo Gottschalk #303 Co-driver – Red Bull SMG Rally Team: “The main part of the stage was really fast and then there were dunes at the end so we were happy to come through all of these sections with no problems. Everyday our confidence in our car’s reliability and speed are increasing. We also know that there are days to come that will suit our Buggy better than the cars of our rivals. We were the first car to reach the dunes so we both had to be alert to do a good job during a difficult section.”

Ronan Chabot #312 Driver – Red Bull SMG Rally Team: “We had a problem yesterday which meant we started behind a lot of other cars today. When we reached the dunes we had some room to manoeuvre and much better speed than the cars in front, we jumped from 19th to 7th and it was great fun to drive our Buggy today. We were speeding up the side of each dune and jumping over the crest. Now I can’t wait to do it all again!” 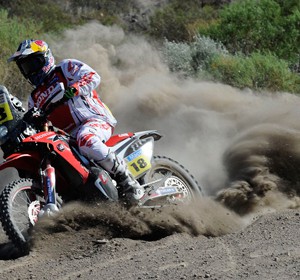 A discrete but emerging rider in the discipline up to today, Sam Sunderland made a grand entrance into the club of elite...
Copyright 2011-2016 Rallyraid.net - RISE Network. All Right Reserved.
Back to top