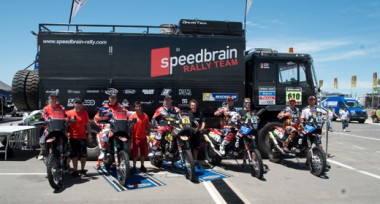 This coming Sunday (5 January) sees the Rally Dakar 2014 get underway at Rosario in Argentina. Almost 9,000 kilometres await the nearly 500 vehicles, among them 196 motorcycles. There are over 5,000 km of special test in front of the field, as the race is held for the sixth time in South America. The course leads through Argentina, Bolivia and Chile, where the toughest rally on earth ends on 18 January in Valparaiso.

The German Speedbrain customer race team is well prepared for the challenge. Coming from an excellent rally season 2013, the five riders aboard the Speedbrain 450 Rally – a machine developed in the Bavarian town of Stephanskirchen – are eager to begin this unique motorsport adventure. The riders, the mechanics and the whole equipment are in place and ready for action.

The rally kicks off with a massive stage straightaway. The opening day sees 809 km of distance to be covered, with 180 of them against the clock. Sunday´s route is expected to be narrow and stoney, the riders will have to be fully concentrated.

The Speedbrain customer race team consists of the following five athletes: Jeremias Israel (32, Chile) is still a rally rookie and a talent to keep an eye on in the future. He gave his debut aboard the Speedbrain 450 in Morocco in October during the final round of the FIM Rally World Championship. Isreal was able to go the pace of the  front-runners. Together with Portugal´s Pedro Oliviera (39) he´s forming the “MAPFRE Speedbrain”
Team. Meanwhile Juan Carlos Salvatierra (31), the calm and collected reigning World Cup champ over 450cc, is supported by the Italian Paolo Ceci (38). The aspiring quintet is completed by Alessandro Botturi (38), also from Italy. The highly experienced offroad ace was with Speedbrain already during the recent Dakar, showing his caliber with several top stage finishes.

Team Coordinator Ulrich Hanus is leading the 13-man squad and looking forward to the race: “Following a long year of preparation with many kilometres of tests and races we´re all eager to start the Dakar. The team is ready for this challenge and everyone´s fully motivated. We´re determined to give our very best and achieve the best possible result.” 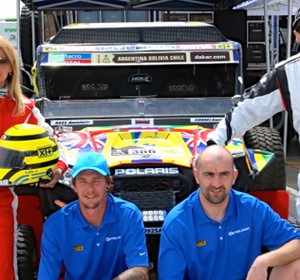 The road to get to (Province of Santa Fe in Argentina) is long, but it is even longer to arrive to the finish line of the world´s...
Copyright 2011-2016 Rallyraid.net - RISE Network. All Right Reserved.
Back to top