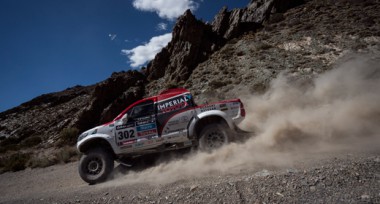 The Toyota Imperial South Africa Rally Team Toyota Hilux of Giniel de Villiers and Dirk von Zitzewitz held a superb fourth overall and remained in contention for a third successive podium finish in the gruelling Dakar Rally at the traditional rest day in Salta in north-west Argentina on Saturday.

The Polish duo of Marek Dabrowski and Jacek Czachor were firmly on track for their career-best finish on the Dakar with their Overdrive Racing Toyota Hilux. After six demanding days of competition, the pair held seventh position, two places in front of Polish team-mates Adam Malysz and co-driver Rafal Marton.

“It has been a long and very difficult first week on one of the most difficult Dakars,” said Overdrive team director Jean-Marc Fortin. “It was disappointing to lose three cars early on, but our team has worked very hard since then and we have Giniel pushing for the podium and two Overdrive cars inside the top 10, which is fantastic. There is still a long way to go, but the goal is to try and climb even higher up the order as the rally heads into Chile.”

De Villiers, from South Africa, finished third in 2012 and second in 2013 with the Toyota and survived the rigours of the first week with aplomb. Power steering problems cost him over 15 minutes on the first stage and ongoing power steering issues delayed him still further as the rally passed through San Luis, San Rafael, San Juan, Chilecito and Tucuman en route to the rest day.

The third quickest time on stage two lifted De Villiers back into sixth overall and he retained that position for the next two days. Despite two flat tyres and brake issues on the punishing fifth stage between Chilecito and Tucuman, De Villiers climbed to fifth place and he reached Salta in a fine fourth position after recording the fourth quickest time on the sixth special. 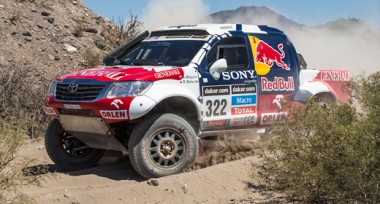 The last stage was a clean one for us with no problems,” said De Villiers. “We finally managed to get on top of the small issues we have been having and the car ran perfectly. There’s still a long way to go. It’s not over by a long way. We have to stay concentrated. There are some long stages to come in Chile. The dunes by Copiapo are famous for their difficulty.”

Dabrowski improved as the rally progressed through the remote terrain of northern Argentina, where high temperature, soft sand and piercing rocks made the going that much tougher than in recent Dakars. The Pole moved into the top 10 after stage two and returned to 10th position after the fourth special. The fifth quickest time into Tucuman – on a stage where the navigation was notoriously tricky – lifted him to seventh overall and he retained that position into Salta.

Malysz held 21st overall after the second stage and he, like Dabrowski, began to climb the leader board well as the week progressed. He moved up to 19th the following day, 16th after day four and the fifth quickest time into Tucuman pushed him into a fine 11th place. Problems for a couple of his rivals lifted the Pole into ninth at the rest day.

Rakhimbayev was the third of the surviving Overdrive Toyota drivers. The Kazakh held 24th after day two, 20th on the next stage and moved up to 14th on day four. The Team Astana driver slipped back to 15th into Tucuman, but reached Salta in 13th overall. 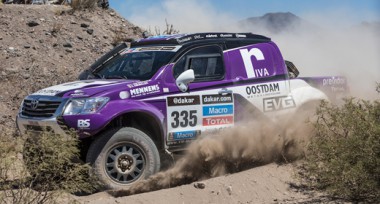 Poulter endured a topsy-turvy first week. The highlight for the rookie was the third quickest time on the third stage, but technical problems cost him a lot of time on SS4. He was 13th overall after the stage between San Luis and San Rafael and that fast time the following day lifted him briefly to 10th. After slipping to 29th overall on day four another troubled day dropped him to 30th into Tucuman and he reached Salta in 29th.

One hundred and forty-seven cars had taken the start of the world’s most famous off-road rally on January 4th in Rosario and only 70 remained in the rally at the rest day in Salta on January 12th.

The Russian pairing of Leonid Ogorodnikov and Anton Nikolaev retired their Overdrive Toyota Hilux before the third stage after slipping to 95th overall on the second special between San Luis and San Rafael. The Kazakh duo of Bauyrzhan Issabayev and Gabdulla Ashimov also fell foul of the second special stage after their Team Astana car was completely destroyed in a serious fire.

This week the route of the 36th Dakar Rally crosses the border into Chile, where special stage action in the Atacama desert takes centre stage. Motorcyclists will take a different route into Bolivia for one day, but the remainder of the Dakar for cars is concentrated in the Atacama, with the event due to finish in the Pacific coastal port of Valparaiso on Saturday, January 18th. 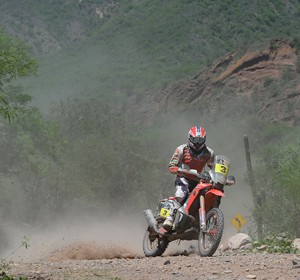 It was a fourth place finish for Joan Barreda, and sixth for Hélder Rodrigues in this, the sixth stage of the Dakar 2014,...
Copyright 2011-2016 Rallyraid.net - RISE Network. All Right Reserved.
Back to top