The road to get to (Province of Santa Fe in Argentina) is long, but it is even longer to arrive to the finish line of the world´s toughest race: 9209 km, of which 5212 will be timed specials.

The Xtreme Plus Team arrived to Buenos Aires last December 31 to take their vehicles at the port, and drive them to Rosario to put the finishing touches before the race.

On Friday January 2, at noon, the team of 28 people lead by Marco Piana was presented for the technical and administrative scrutineering. The four crews took their RZR to Parc Fermé located next to the monument dedicated to the Argentinean flag, close to the river and not so far from downtown.

The team environment was friendly, and everyone waits for the launch of the race tomorrow, January 5.

“This is my third Dakar on a RZR – says Willy, winner of the T3 and single-seater twice, both time with Polaris Xtremeplus – and I feel fine! Last year, I finished 40th and I will try to do better, even if it will be harder this time due to the increase of fast cars in the race. If I take the two victories again, it will be great for the team, and for me. This year, the terrain of the race will not be the best for the RZR because there will be less sand and it is there were we can make the difference… Anyways, we will see, the Dakar is always hard, but the Xtremeplus Team is excellent, well organized, serious and so friendly!

“It is my second Dakar – confirms the French/Congo driver who wanted to participate in the Dakar rally only once. Passion bites me and it went straight to my blood… It was impossible to escape, I wanted to come back! For the moment, everything is fine. I launch the second edition more calmed because I have more experience and now I know how the scrutineering works, I feel less stressed. I am also happy to be back with the team and now… let’s go to the first stage!”

“I have already done the Dakar on a bike and as assistance service, but this is my first time on the RZR. I love the scrutineering process and I found it very amusing to receive all the stamps in my Dakar Passport and my badge. This is when I know I am ready to start the race! My goal is to be at the finish line!”

“It is my first Dakar – tells the Saudi driver- and I am impressed by the number of cars, bikes, trucks, the amount of people, papers and stands that we had to go through to complete the scrutineering process. I had never seen this before, and it is all so well organized! For me, the Dakar is a discovery. I will try to adapt to it as fast as I can and role smoothly… for the first week.”

“It is my third Dakar with RZR and I have the feeling that this class and the machines are receiving more and more attention by the people and they are growing fast. After three year, the Polaris RZR are more and more reliable. It is a product on a quality-price ratio that allows competitors to have fun, and also, to obtain results. The proof is that this year, we have four cars and four different nationalities: French, Congo, Australian and Saudi.”

Tonight: The starting podium at the Flag Monument. Tomorrow morning it will start with a first road connection of 405 km prior a timed section of 180km and another road connection of 224km to arrive to San Luis. 809 km total on the first stage! 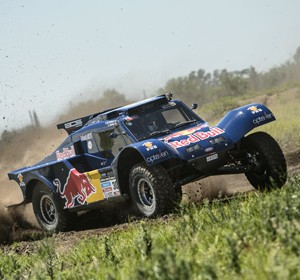 Rally racing legend Carlos Sainz is revved up and ready to go following his arrival in Argentina for the 2014 Dakar Rally. Elite...
Copyright 2011-2016 Rallyraid.net - RISE Network. All Right Reserved.
Back to top