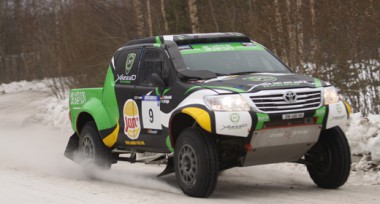 Four minutes… Not a small gap for only a hundred kilometres. But, of course, Vladimir Vasilyev, defending champion of Baja Russia – Northern Forest, didn’t give up on catching his rival Yazeed Al-Rajhi on the last special of this year’s race, the first ever FIA World Cup event on Russian soil. Until km 47 he reduced the gap to 2 minutes 30 seconds, at km 65 he was another 16 seconds closer to the Arab driver, but all his efforts were in vain as he failed to take the victory on his home event. Yazeed Al-Rajhi’s first outing in snow ended with an outright victory. Al-Rajhi praised his co-driver and his team after the finish:

Third to finish was Reinaldo Varela, another driver who wasn’t considered among the most obvious contenders for podium before the start. Although the driver from Brazil kept describing the event as “very difficult” he managed to overcome all obstacles and landed on the last podium place.

“The track was very nice but very slippery again. In the first part of the special we pushed hard because we knew that our rival is only two minutes behind us, then we just wanted to keep our advantage and avoid punctures. The landscape was really beautiful and we are happy with the third place, that’s important for the World Cup. It was our first time on snow, but next year we’ll come back for the victory!”, his co-driver told RISE Network after the finish. 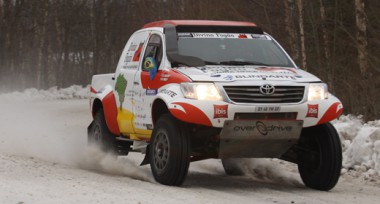 Poland’s young gun Martin Kaczmarski enjoyed Baja Russia – Northern Forest from start to finish and was happy with his result: “If someone told me before the start I could finish fourth, I would have accepted it. We had nice rivals and great atmosphere. Today‘s track was difficult because we drove in the opposite direction as yesterday. I feel the car again after having a long break after the Dakar. The good teamwork was very important at this rally, and our team is great.”

Behind his young compatriot ex-rider Marek Dabrowski took the fifth position is his Overdrive Toyota. “It was very nice today, we pushed at the maximum. At the beginning of the track the traction was good and we were fast. I think I was improving during the weekend, I started to feel the snow. The car was prepared perfectly, the team did a good job.”

Ruslan Misikov, multiple Russian champion and one of the founders of Baja Russia – Northern Forest, couldn’t hope more then 6th place after facing problems on yesterday’s stage. „The stage was good today. Taking our yesterday results into account, we decided that we can’t win and catch up a crew in front of us. But losing to a crew behind us was not an option at all – we had 32 seconds gap and realized that they won’t overtake us. So we just kept a steady pace avoiding mistakes.” 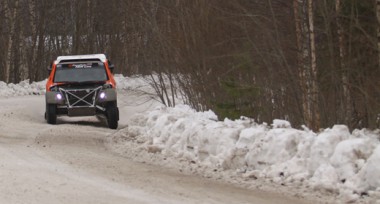 Also hit by problems on Saturday, Boris Gadasin was once again happy with his car and managed to climb up two places today by clocking the second best time behind Vasilyev on the special.

Baja Russia – Northern Forest ends today with the podium ceremony and, of course, a big party at the Ice Palace of Igora Ski Resort. 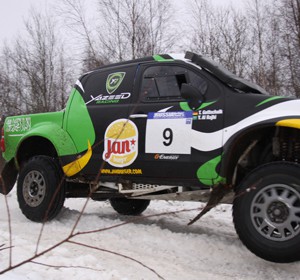 If we were surprised yesterday seeing Yazeed Al-Rajhi winning the prologue, we can be even more surprised today after the rally...
Copyright 2011-2016 Rallyraid.net - RISE Network. All Right Reserved.
Back to top