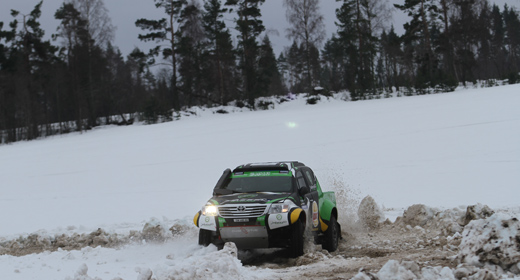 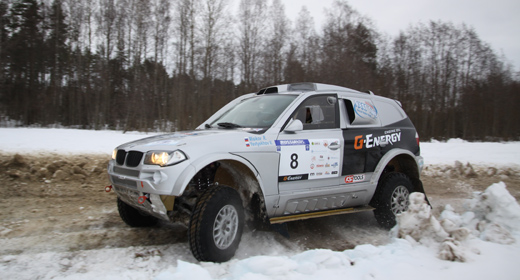 The little intermezzo was caused by a time control – a better to say, the lack of it. But this was the biggest problem during the short warmup, no drivers did experience any major problems. On the other hand, all of them were complaining about the slipperiness of the track and Martin Kaczmarski demonstrated that the situation could have been dangerous. Mini’s young gun from Poland hit something in a corner and rushed off the track – directly towards the spectators. Fortunately no one was injured, not counting the serious shock some experienced, told by one of the lucky survivers ones later with a smile.

Al-Rajhi seemed to be very happy after the finish, and even happier when he learnt about the results in the first special of his sixth cross-country rally and his very first snow event in the discipline. Zheludov, winner of Baja Poland last year was a mere one second slower, three times Russian champion Ruslan Misikov finished third 17 second behind. Gadasin came in fourth followed by Varela’s Toyota and Vasilyev’s Mini. Kaczmarski in the other Mini was seventh in front of Zapletal, Dabrowski and Cherednikov, the first two with equal time.

From this year the first ten crews can pick their starting position. After the selection, the starting order for Saturday’s stage will be the following:
1. Zapletal
2. Vasilyev
3. Zheludov
4. Al-Rajhi
5. Gadasin
6. Misikov
7. Varela
8. Kaczmarski
9. Cherednikov
10. Dabrowski

Yazeed Al-Rajhi: “The track was slippery, surprisingly slipper, but I think we did a good job, we held it under control. We drove with caution, no attack today, because I tested only 15 km on snow! And I’m not a professional, this is only my sixth event in cross-country rallies, four at my home rallies, once in Qatar and now here in Russia. But tomorrow we will attack. I think my experience at Rally Sweden helps a bit with the feeling of the snow but the two cars are completely different.”

Vladimir Vasilyev: “We expected a very good prologue, of course we were  a bit nervous because of having to start out in front. It was very hard as we had to open and clean the road for the others. We are satisfied with the result, of course our speed was not the maximum. It was interesting that when the first cars arrived, the CP before the Service Park didn’t exist.”

Marek Dabrowski: “The track was very slippery, and I lost a lot of time Because of thinking on what should I do. We did ten or maybe twenty kilometres of testing on snow altogether. The car was very good.”

Maciej Marton (co-driver of Miroslav Zapletal): “Everything was OK for us. We drove very carefully because the track was very slippery. At the end of the stage everyone was looking for the time control but it simply didn’t exist.”

Martin Kaczmarski: “It’s the first time for me to drive on snow in the Mini but I have some experience in driving on frozen lakes about a year ago. The stage was very nice, some parts were really technical. I lost about 3-5 seconds because of a ‘visit in the fields.’ I hit something in a corner and I ran off the track towards the spectators. I was surprised by how slippery the track was, so I didn’t want to take any risks. For tomorrow we can chose our starting position, I wonder what could be the best position.”

Tapio Suominen: “It was OK. I lost one second because of beeing too careful but tomorrow we will attack. The track was very slippery.” 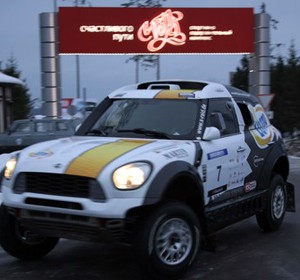 X-raid has only just returned from the South American heat – and now it hits the road to snowy Russia. The Baja Northern...
Copyright 2011-2016 Rallyraid.net - RISE Network. All Right Reserved.
Back to top