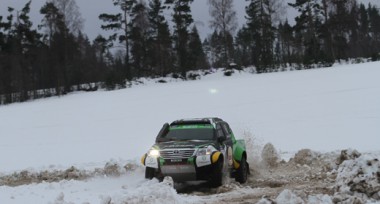 Winner of yesterday’s prologue, Yazeed A-Rajhi is still in the lead after the first long special of Baja Russia – Northern Forest infront of his team mate Reinaldo Varela and Mini’s Vladimir Vasilyev. Today’s track was quite narrow with a big part running in the forest and some drivers got into closer contact with the trees, for example Ruslan Misikov who arrived with his BMW X3CC’S front right part broken after a brake problem and Boris Gadasin whose G-Force Proto’s front left part was damaged after “kissing” a tree. Gadasin’s car also suffered a broken driveshaft as early as at km 20 having left him with rear wheel drive for the rest 80 kilometres. Similar happened to Aleksandr Zheludov at km 56.

Timo Gottschalk (co-driver of Yazeed Al-Rajhi, Toyota): „The road was bumpy, but we had a good fight and a good result. In this first lap we wanted to see where we are, for the second we know the track better. The terrain is quite loose in the forest parts.”

Martin Kaczmarski (Mini): “We had the perfect speed but I think we didn’t choose the right tyres as the studs in these are quite small. I expected more WRC like tracks, there were a lot of straight part we drove flat out. It was very slippery again. The snow is soft and in some parts is mixed with sand, sometimes there is ice but not too much. Our goal for the next lap is to finish and not to break the car. I like the event and I hope to be back next year.”

Marek Dabrowski (Toyota): “It was very nice. Our plan was to check the speed and we didn’t loose too much time so we are happy. The car is very good. The bigger engine would be better, but my own car is still on the boat back from the Dakar. On this car all modification we made for the rally is softer suspension and getting everything covered.”

Boris Gadasin (G-Force Proto New Line, arrived with front left part of the car damaged): “There were too many trees and too much power. We broke the front axle 20 km into the special so we drove the rest 80 km in rear wheel drive.”

Maciej Marton (co-driver of Miroslav Zapletal, H3 Evo): “It was difficult as we were the first car, it was hard for the first two-three cars to clean the track. We’ll see what happens in the next round. The navigation itself was easy as the track was well visible.”

Gustavo Gugelmin (co-driver of Reinaldo Varela, Toyota): “It’s our first time on the snow, and the track was very slippery. The trees were very close and they were so big! There were some very fast parts as well where we drove at about 170 km/h. I think this is a very difficult race, but the atmosphere is great. We want to complete the whole World Cup, so our strategy is to finish and score points both here and at all the other rounds.”

Yazeed Al-Rajhi (Toyota): “It was OK, we enjoyed the special, but we still need more kilometres to learn the car. We are in the lead but in the second round everybody will push more so we have to increase the speed, too.” 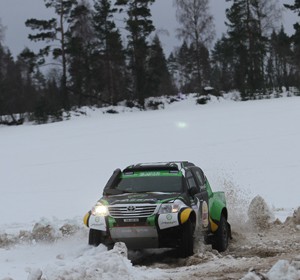