Overdrive Racing’s Saudi Arabian driver Yazeed Al-Rajhi sealed a stunning victory in the Baja Russia Northern Forest ‘14, the opening round of the 2014 FIA World Cup for Cross-Country Rallies, which finished in Igora on Sunday. 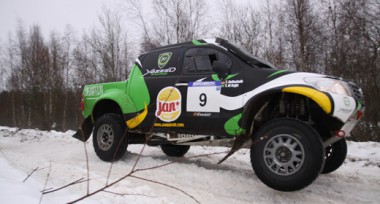 Partnered by the experienced German co-driver Timo Gottschalk, the Toyota Hilux driver overcame a mixture of icy, snowy and slushy winter conditions in Russia to beat his nearest rival by 1min 48sec and seal his second cross-country rally victory in the space of three weeks. He also takes the early outright lead in the FIA World Cup for Cross-Country Rallies.

The Brazilian pairing of Reinaldo Varela and Gustavo Gugelmin steered the second Overdrive Toyota Hilux to a fine third overall, behind runner-up Vladimir Vasilyev, and the Polish duo of Marek Dabrowski and Jacek Czachor capped a superb weekend for the Belgian team with fifth position.

“I am absolutely delighted to have three cars in the top five at the finish of this difficult event and to see Yazeed take such a strong victory,” said Overdrive team director Jean-Marc Fortin. “Reinaldo and Marek were also impressive with their split times on the stages. This is a great start to the FIA World Cup programme for both of them, especially considering that this was a snow rally.

“We will have a strong team on rounds of the series all season and the next round in Italy is also a great opportunity for us to take a second successive victory.”

A ceremonial start preceded a timed six-kilometre super special stage in the Priozerskiy area on Friday afternoon. Two timed selective sections then took teams through the northern Russian wilderness on Saturday and there was a third selective section on Sunday before the podium finish in Igora.

Al-Rajhi started as he meant to go on by winning the 6.51km super special stage to edge into a two-second lead over Finland’s Tapio Suominen. Varela and Dabrowski held sixth and ninth.

The Saudi continued to attack through the first of two 102.27km sections on Saturday. He lost the first by just one second to Suominen to maintain a tiny one-second lead heading into the repeat of the day’s timed test. The Toyota driver shaved around two and a half minutes off his morning time in the afternoon to head into the overnight halt with a lead of 1min 09sec over Suominen.

Varela and Dabrowski were classified third and sixth through the second stage and sixth and seventh through SS3. They held fourth and sixth overall at the overnight halt.

Vasilyev pipped fellow Russian Boris Gadasin by eight seconds to win the final 101.53km selective section on Sunday morning, but third position was sufficient for Al-Rajhi to claim outright victory by 1min 48sec. Varela and Dabrowski finished the stage in fifth and sixth and climbed to third and fifth in the overall standings when Suominen slipped out of contention after leaving the road near the finish. 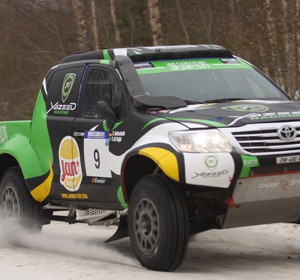