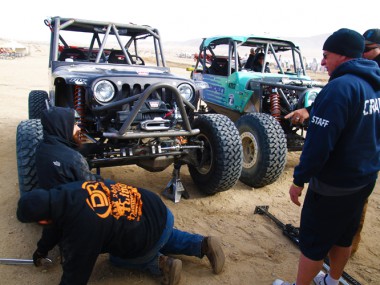 It’s absolutely mind blowing to think that this 4×4 festival and accompanying RV city in the desert started just 8 years ago as a dozen friends out wheelin’ for a 12 pack of beer. I’ve read the stories, seen the live feed and now I’m here… but not just as a reporter… actually as a driver!

Event founder Dave Cole has put together a class of 6 identical Jimmy’s chassis, 5l V8 Mopar powered ULTRA4 buggies… for rent! Any one like me who dreams of the dust and adrenalin can now be a part of it… for the ridiculously reasonable price of $5000 per team! And it’s no just for fun mini cars, they are full-on monsters. I know as I’ve just spent two days breaking one in! For a reason I can’t quite understand two-time KoH winner Shannon Campbell is in the Spec class along with last year’s hero Jim Marsden, Jessi Combs, the fastest woman in the world and a few other people having their first experience in something so mad. 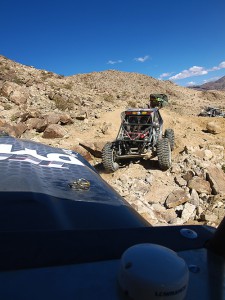 Hammertown comes together on the Johnson Valley lakebed but because the landscape is nothing but rocks and dust everything needs to be brought in, including accommodation. That’s a bit of an issue for someone who’s build up to the race was backpacking around Central America for a month before. Thankfully that problem was taken care of by the Lucky Dog Racing team, the American guys who came to Europe to compete in the Welsh and Portuguese ULTRA4 races. Driver Levi Shirley also found me a racesuit! Top guys! (For lending me a helmet I need to give special thanks to Cody Addlington of ADD Racing who will be in the Legends class in a Hi-Lux.)

I am sharing 4701, the DynoMax car, with Eric Bothwell and after the briefing which consisted of advice that if she gets out of shape in the whoops just let her sort herself out because she’s moving about far too fast for you to react to, so just leave it we headed out to see what it could do…

The noise from the engine is incredible. The roar of the V8 is insulated by nothing but a single sheet of stainless steel but the sounds of the underneath crashing against rocks isn’t quite so nice… like pushing an empty shopping trolley off a curb… 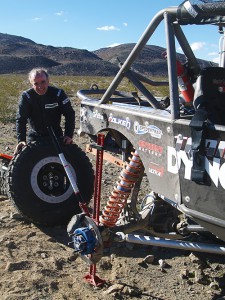 It’s far and beyond anything I’ve ever sat in before. More powerful… but what is incredible is the suspension!! I couldn’t see over the bonnet too well and wondered if there was a rock in front. The tyre popped up into view and there was a bit of a jerk and the back tyre came over… and that’s all it takes to get over a 2ft rock. Easy. Except in the race there is 112 miles of this!!

Qualifying is on Tuesday and the course is terrifying! It’s much easier to climb rocks in valley but doing it on a ledge with big drops on either side is hard. Our main race, as part of the EveryMan Challenge, is on Thursday and the big race takes place on Friday.

Live streaming can be found on www.world4x4.org

Thanks again to Lucky Dog for the wild elk stew. Ruby the pug dog is running around happily and the cooler is starting to run low on Lone Star lager. We’re all about to head out to Backdoor to see the challenge between the Ultra4 cars and the massive Rock Bouncers. I will have a report on qualifying tomorrow. 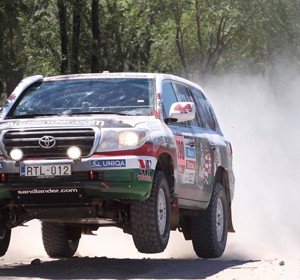 Túrkeve Cup will be the second round of the Hungarian Cross-country Rally Championship but the first one where the spectators...
Copyright 2011-2016 Rallyraid.net - RISE Network. All Right Reserved.
Back to top