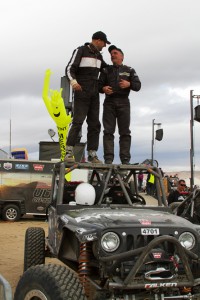 For a few years I’ve been interviewing racers and am always quite bemused that “Yep, everything went OK,” is all they could say for the stunningly beautiful landscape they’d just spent a few hours driving through, but now I understand why. I have just spent 6 hours racing in an ULTRA4 Spec car, both driving and co-driving, and all of that has just compressed into a single rocky and dusty moment of WOW! I guess it will take a day or two and a few conversations for all the stories to come out… but it seems that we finished 3rd!

The nerves were a little frayed this morning at 5am as Eric Bothwell and I started to get ready but the DynoMax team came over to the Dust Junkies pits and gave us an excellent prep-talk. Basically, bring the car back home, boys! At the start line Dave Cole leaned in and gave us a friendly warning not to overdrive the car… and then we were off.

The Spydertrax car on the line beside us gave way and we were ahead as we went up the first hill… and inched passed a car from the class in front on its roof. A sober reminder! But then it was straight onto the lake and into an impenetrable cloud of d 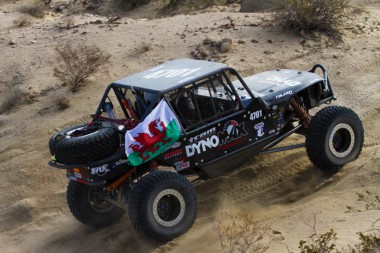 ust. Some 40 cars had gone before us and we picked off a few but had to slow down to a crawl as we couldn’t see anything. Jessi Combs in the Falken Tyres car couldn’t either but it didn’t stop her powering ahead at break neck speed with zero visibility… Respect.

When the dust finally thinned out we saw the surprising sight of Shannon Campell with his bonnet off. Fuel pump issues cost him an hour in the first 10 miles.

I guess I need a little time to put every memory and impression in order… but I do remember pulling into the first pits to do a driver change. Overwhelming panic is what I would have thought I would have felt, but actually I was perfectly calm. The car is much tougher than I imagine it is and also a lot more competent too; it’s easy to control. And powerful! Foot to the pedal does wonderful things! The 5.7 V8 Hemi upfront blasting out through the DynoMax exhaust actually makes your ears ring!

We caught up with a Legends class car but he was weaving around so we criss-crossed around through his dust until the superior power of the Spec class car out dragged him up a sandy hill… all while the helicopter was circling overhead. For a few years I’ve watched the live feed until early in the morning and here I was racing on TV! I was wondering if my girlfriend was watching!

We caught up with another Spec class crew and it was amazing to find out that after just a couple of hours pre-running behind the wheel I could keep up with them, and when they got hung up on big rock I aimed at a few rocks and clattered past them, the roar of the engine being complemented by the horrible grinding sounds of the undertray dragging on the rocks. 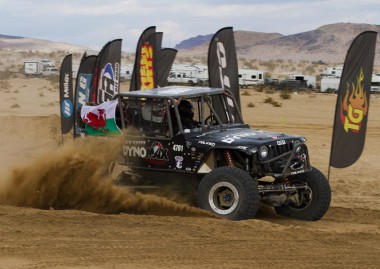 The next change-over at the start / finish wasn’t too elegant. I was trying to get myself out when one of the pit crew came to help by dragging me out. The 2nd lap was much clearer and it was much easier to settle into a constant speed and pick a route through the ‘whoops’. Eric was cool and calm and we were counting the miles off quite well.

But then we got to a rock crawl called Aftershock and the nerves came back. We were a bit too quick to choose a way through and got beached on a big rock. I got out and had the idea to throw some rocks under the wheels, but with the helmet on and trying to do everything as fast as possible I slipped while trying to pick up a big stone and crushed my finger. It wasn’t fun trying to winch with the nail flopping off. Then I got the strop stuck under the rock I’d wrapped the strop around and after a few dizzy minutes of struggling with it had the idea to get Eric to drive on it to get it free. It worked! There were a couple more moments like this, beaching and winching, and then with Eric hitting my hand while putting the gears back into hi-range I was about ready to faint… But no one gives up at KoH!

We got stuck again coming down Jackhammer so I jumped out with the strop again… but we’d hit a rock somewhere and bent the fairlead into the winch. The rope was stuck and we weren’t going forwards! Thankfully the Hi-Lux behind us, 4619 I think, pulled us back and Eric used another technique that we hadn’t really tried before… momentum! It is pretty cool being inside the car, but standing by that exhaust getting pelted by dirt and watching how much the suspension flexes and how well the Falken tyres gripped. Magic! 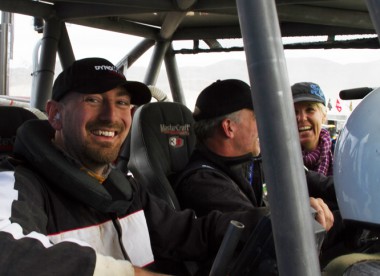 But then it was the almighty Chocolate Thunder, the hardest trail on the course… and we had no winch! “What do we do, dude?” Eric asked at the bottom. I recalled the wise words of a petrol-head philosopher; “When in doubt, flat out!” Being in front of a huge crowd was great, it really gives extra impetuous… and stress! No one wants to screw up in front of an audience! Instead of calling out, “Easy, easy!” here I was just shouting, “Go, go, go. Don’t stop!” The amount of grip that the Falken tyres have on the rocks is amazing! So is the amount of punishment that the Spec car can take. The shock of smacking the undertray on the big rocks followed by another roar of the engine and somehow we just bounced all the way up. Easy! The back wheel that fell off might have helped…

There was some amazing trails that wound up over the spine of a couple of hills with stunning views over the desert landscape and then it was the final stretch. When drivers say that they can hear every noise in the car near the end of the race, it’s so true. The last 30 miles felt like the front axle was falling off and we had 3 punctures… and Eric was getting a bit wound up about being close to the finish. We were hitting some whoops and rocks hard coming down Elvis and I almost had to call a time-out. The run back into Hammertown was horribly slow and rough but then we were over the final rise and cruised down to the podium under the Red Bull arch. We pulled up in front of the Jumbotron, I took my helmet off and found that my glasses were broken and Eric was so overcome about making it to the finish that he burst into tears. That’s how much KoH means to people!

Milling about in the group of cars with people taking photos of us while we stood on the roof and the DynoMax people congratulating us was amazing. Someone even wanted my autograph!

So, another crazy idea that me and Dave Cole had in Las Vegas has come to fruition. Finger is bandaged, my girlfriend Sanda who was watching the live feed is impressed and everyone is telling us how well we did. Magic! Dave Cole’s brave idea worked. Two complete novice racers took the wheel of a car for the first time 4 days ago and took it to a podium. Really, if we can do that, anyone can! Next year there will be 30 cars. I will be in one of them!

Jessi Combs, the woman’s land speed record holder won, Ross Stanford from Spydertrax took 2nd, they overtook us about 10 miles from the end. The guys from Crawl Magazine didn’t go up Chocolate Thunder, so it seems they don’t like to crawl after all and got a big penalty, Jim Marsden had trouble with fuel pumps and ran out of fuel at the foot of Elvis and Shannon Campbell just couldn’t catch us! (after his hour delay…)

Thanks again to Lucky Dog Racing for a bed in their truck and the fantastic food, Cody Addlington fo ADD Racing for lending me a helmet, Dave Cole for making the best 4×4 race in the world and the brilliant Dust Junkies who were tireless in their calm support for the Spec class and DynoMax.

But stay tuned. The big race, the 2014 King of the Hammers is tomorrow. Watch the live streaming at www.ultra4racing.com/live 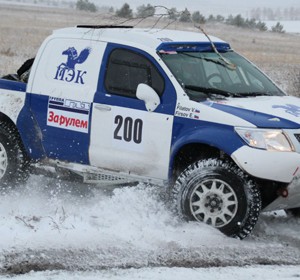 Along with the winter Olympic Games 2014 in Sochi, one more significant sports event will take place near St. Petersburg...
Copyright 2011-2016 Rallyraid.net - RISE Network. All Right Reserved.
Back to top