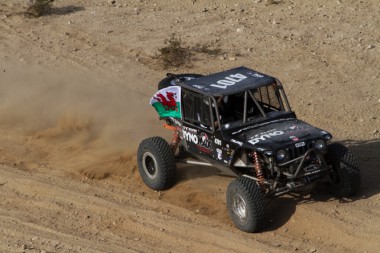 It looks like its nice and sunny but it was so cold in the car before the start that I was actually shivering. We’d driven the course a couple of time the day before so were familiar with the twists and turns and rock climbs, even the gnarly one under the Red Bull arch but my team mate Eric Bothwell was a bit nervous as we watched the others head off before us. We were in the strange position of being able to see the other runners on the massive Jumbron TV but then we were called up to the start flag…

The first couple of hundred meters went fine. But just before we entered the first gully we understeered a bit wide and slammed into a big rock. The 5-point harness holds you very tightly in the seat so I couldn’t move my head out enough to see if we had a flat but we weren’t slowed down so we carried on regardless. We managed the rest of the course just fine, even the nasty rocks under the arch and it wasn’t until we got to the end that event founder Dave Cole grumbled about the flat that we realised that we’d driven pretty much the whole lap on just three tyres… But we weren’t alone… every one of the six cars in the class had a flat. Jim Marsden hit something hard enough to mangle his wheel and calliper holder and Shannon Campbell, who went around the 1 mile course a full minute faster than us, bent his front axle. The pits, when we got back, were chaos! 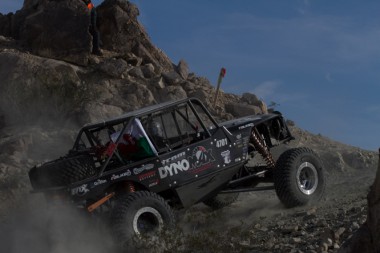 Anyone who knows what ULTRA4 racing is knows who Shannon Campbell is. The only two-time winner of the KoH and the current ULTRA4 series champion is in the Spec class because his sponsors Fox Shocks invited him, but he was full of smiles despite his car not being in the best shape. “It’s a lot different to what I am used to,” he said. “In my car you just point it and mash the gas pedal! The Spec class car you have to drive with finesse, be easy on the throttle… but they are very good cars. Really good fun!”

So that was our little moment in the spot light. The big boys spend all day qualifying on Wednesday so the live feed will be full of action. We’ll be out as part of the EMC on Thursday. Look for the DynoMax sponsored car with the Welsh flag one the back… which I managed to put on backwards. (It was before coffee!) Wish us luck! 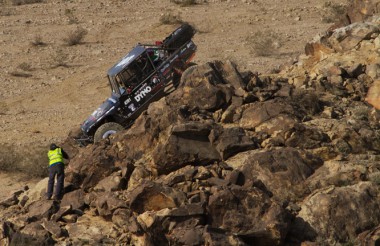 A couple of people to thank. Lucky Dog Racing for the incredible chicken casserole. The best food I’ve had all week. And Dave Morganthall of www.toplessfortatas.com a breast cancer awarness website, for the photos here. 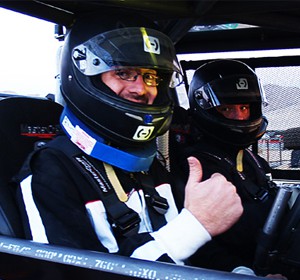 It’s absolutely mind blowing to think that this 4x4 festival and accompanying RV city in the desert started just 8 years...
Copyright 2011-2016 Rallyraid.net - RISE Network. All Right Reserved.
Back to top