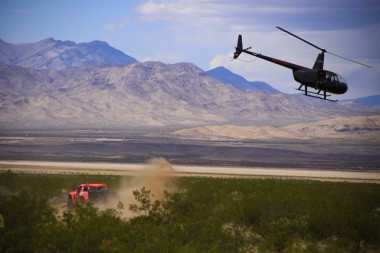 “Just go down the street and look for the giant praying mantis with fire coming out of its head. You can’t miss it!” In Las Vegas directions like this are quite normal.

Lined with neon and a generous assortment of babes and freaks the new Miss Mint poses in a clinging minidress showing off her new sash, but the sexiest things on Freemont Street have four wheels! The Best of the Desert Mint 400 has come to town to wake up this normally sleepy desert backwater and add some much-needed glamour and brutality. 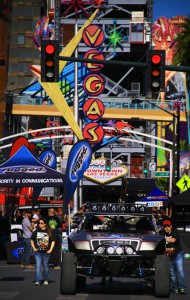 Established in 1967, way back in the distant beginnings of desert racing, the Mint 400 was for decades one of the most iconic races, right up there with the Baja 1000 and there were years when over 550 entrants blasted through the deserts around Las Vegas. After being brought back to life in 2008 the Mint’s iconic status has remained unchanged, although the heydays when a bright yellow Datsun 1600 converted to 4×4 was the height of innovation are no more. The Fremont Street contingency parade was full of million-dollar Trophy Trucks and buggies with spectacular amounts of power and suspension travel. They exist for only one reason… to go fast in the desert. Really fast! 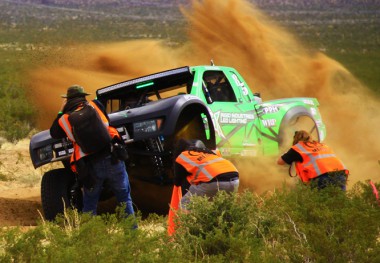 Even though it was a month ago my head is still full of King of the Hammers and as big and bad as ULTRA4 cars are a Trophy Truck is huge… and at full speed, sky-high rooster trail behind, is enough to elect an impressive Wow from me. It’s not just the sight though, the sound of a tuned 8L V8 topping out at 200km/h, revs shimmering over the bumps and exhaust note echoing off the rocky hills, is something every off-road lover should experience.

At the end of a mile-long straight a deeply cut and rutted 90 left sent the cars in the air amid great clouds of dust. Some managed the corner better than others but Robby Gordon in the bright orange Speed Energy car was the most spectacular with all four wheels off the ground. (Impressive in a Trophy Truck with its massive suspension travel designed to keep the wheels in contact with the ground) But it was only good for third. 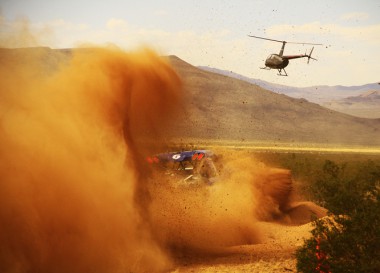 At the top of the time sheets after the 3.4 mile qualification course was Dale Dondel, a relative new comer to the Trophy Truck world. I couldn’t find him but on condition of anonymity I did get the opinion of only racer. “He used to build sand cars, those open chassis insanely powerful buggies that people in Abu Dhabi just can’t get enough of but then he moved into Trophy Trucks. His is about 1000lbs lighter than the other trucks but it isn’t as strong. In the Parker 425 he also got the pole but had broken down by something like mile 30, so we’re not too worried about him. I don’t think he’ll get too far!”

A good qualifying position is important though as it means a clear view for the first 100 mile lap. Behind Dondel will be Red Bull sponsored Bryce Menzies, the reigning champion and the 2012 winner Gordon both going neck and neck. 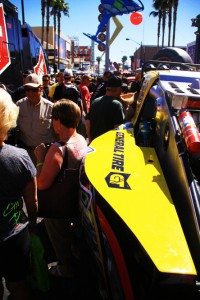 Not set to trouble the top guys will be Dave Bovich in the only ULTRA4 car entered in the race. “We’ll be starting about 87th, but that’s OK. That Trophy Trucks are longer, have much more suspension travel and are wider so they can get through a corner at 80mph where we can do it at 40. We’ll have an advantage when the course gets all chewed up as with the 4×4 we won’t get stuck in the ruts like some of the rear-wheel drive cars… They call the ULTRA4 cars Rock Donkeys, but you’ll never see a Trophy Truck do the Hammers!”

My alarm clock is set for 4:15, the helicopter booked for 6am and the report on the full race will be here tomorrow evening. Sit tight, it’s going to be a hell of a race! 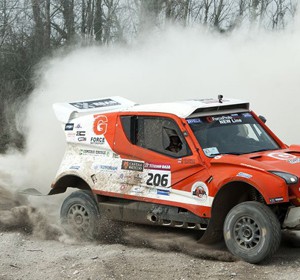 After the dispute from the prologue, Italian Baja continues in Pordenone. Yesterday the pilots had to drove through five...
Copyright 2011-2016 Rallyraid.net - RISE Network. All Right Reserved.
Back to top