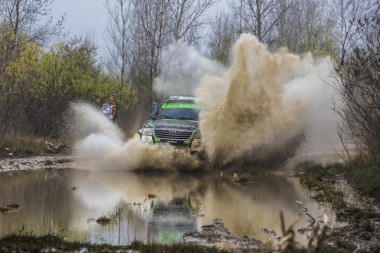 Overdrive Racing’s Yazeed Al-Rajhi and Timo Gottschalk extended their lead in the 2014 FIA World Cup for Cross Country Rallies after taking a stunning victory in the 21st Italian Baja, which finished in northern Italy on Sunday.

The dominant Saudi Toyota Hilux driver and his German co-driver won seven of the event’s 10 stages to reach the podium with a winning margin of 44 seconds over the Russian driver Boris Gadasin. They now have maximum points in the FIA World Cup after two rounds.

Poles Marek Dabrowski and Jacek Czachor won the opening super special stage and rounded off the podium with a solid third position to maintain their FIA World Cup challenge. 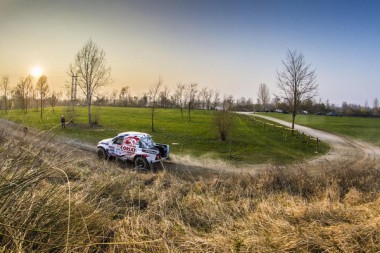 The Brazilian duo of Reinaldo Varela and Gustavo Gugelmin, winners of the event in 2013, reached the finish in seventh overall on this occasion. Overdrive Racing Toyotas won nine of the 10 selective sections.

Adam Malysz and Rafal Marton were forced out of fifth position in the fourth official Team Orlen-supported Toyota on the fifth special stage with a broken gearshift lever.

The Russian driver Aleksandr Zheludov and his co-driver Oleg Tyupenkin were classified in fifth place in another Overdrive car.

“This is another fantastic result for Overdrive Racing and Toyota,” said Overdrive team director Jean-Marc Fortin. “Yazeed has again shown what an excellent driver he is on a wide variety of surfaces and he, deservedly, extends his lead in the FIA World Cup. Marek and Reinaldo also gave solid performances to maintain our winning start to the season.”

Overdrive Racing made the perfect start on the 9.20km ‘Memorial Claudio ‘Caco’ Azzaretti special stage on Friday evening. Dabrowski set the quickest time of 8min 02sec to move into a five-second advantage over the Russian driver Vladimir Vasilyev. Malysz was third in the second Toyota, a mere two seconds further behind, and Varela was fourth. Al-Rajhi took a conservative approach to the special and recorded the seventh quickest time.

Saturday’s action centred around a series of selective sections on the dried Meduna riverbed between Zoppola and Cordenons in the Cosa river region. Al-Rajhi began the defence of his FIA World Cup lead by setting the quickest time on the opening 44.08km of the Pasch stage and climbed into second position, five seconds behind Dabrowski. Malysz was fourth but Varela lost just under two minutes in the stage and slipped to ninth

The first of three passes through the short 18.85km of the Cosa selective netted the Overdrive Racing team another fastest time and stage winner Dabrowski extended his lead to 19sec over Russia’s Boris Gadasin. Al-Rajhi, Malysz and Varela held third, fifth and eighth.

Al-Rajhi was quickest on the second run through Pasch by just four seconds, as Gadasin moved into a five-second outright advantage over Dabrowski. Malysz retired with a broken gearshift lever, but Varela was running well in seventh.

The Saudi was again quickest in the re-run of Cosa, albeit by one second from Gadasin and he moved to within a similar margin of second-placed Dabrowski. Varela set the third quickest time and remained in seventh position. Gadasin hit back in the final stage of the day to reach the overnight halt with a 21-second lead from Al-Rajhi. Dabrowski was well-placed in third overall and Varela held seventh.

Sunday offered two runs through the Valvasone and Mosaico specials of 18.77km and 44.29km respectively. Al-Rajhi was in fine form from the start and the quickest time lifted the Saudi to within four seconds of Gadasin and the outright lead for Overdrive Racing. Dabrowski and Varela maintained third and seventh.

The Saudi snatched an eight-second outright lead through Mosaico 1 with the fastest time and his team-mates maintained third and seventh heading to the remaining two selectives.

The penultimate Valvasone test started slightly later than scheduled, but the delay failed to stop Al-Rajhi extending his advantage over Gadasin to 11 seconds with just 44.29km through Mosaico 2 left to run. Dabrowski set the third quickest time to retain third and Varela headed to the final stage in seventh position.

Al-Rajhi was not to be denied and a stunning time through the final stage was enough to beat Gadasin by 33 seconds and secure a winning margin of 44 seconds.

The 2014 FIA World Cup for Cross Country Rallies now switches to the long distance events with the Abu Dhabi Desert Challenge next on the agenda on April 4-10. 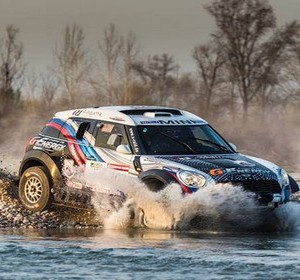 In the Baja Italy, the second round of the FIA Cross Country Rally World Cup, X-raid succeeded in once again securing a top result....
Copyright 2011-2016 Rallyraid.net - RISE Network. All Right Reserved.
Back to top