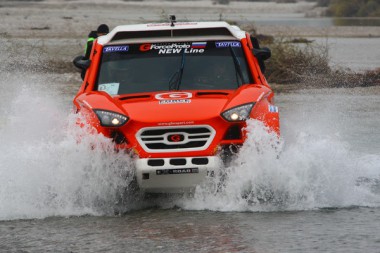 The Italian Baja offered yesterday a great show, emotions and surprises during the second race of the FIA World Cup for Cross Country Rallies, which will end today after the over 300 km track. After gaining the first position at the Friday’s prologue ( Claudio “Caco” Azzaretti Memorial) with his Toyota Hilux Overdrive, the Polish Marek Dabrowski leaded the first lap along the Selective Sections “Pasch” (44 km) and Cosa (19km) but had to renounce of his leading position in favor of the Russian Boris Gadasin with his G-Force Proto, who constantly recovered and got the best time. The “Zar” of St. Petersburg, who won the Italian Baja in 2007, 2009 and 2011, will start today with a gap of 21’’ ahead on the Saudi Yazee Al-Rajhi, who will drive another Toyota Hilux Overdrive, able as well to overpass his Team companion Dabrowski, who is now seizing the third position with a gap of 24’’.

The two Mini All4 Racing of the X-Raid Team didn’t reach the podium: the Polish Martin Kaczmarski secured himself the forth position with a time of 1’27’’ , with a gap of just 3’’ ahead on the other Russian driver, Vladimir Vasilyev. A gap of 2’34 from the top of the rank obliged the Brazilian Reinaldo Varela to climb back up to seventh position, so it seems to be quite difficult for him to repeat the success he got in 2013.

As usual, foreign competitors got the best results, and first among Italians drivers arrived Elvis Borsoi with a Mitsubishi Pajero in T2 class, the category which indicates the vehicles derived from the original models. The champion in charge Lorenzo Codecà with the official Suzuki Grand Vitara suffered a complicated race because of the ford crossing and the consequent tires damaging and problems then in passing the photocells; he was therefore obliged to slowly drive, widening his gap after Borsoi to more than 17’. The young Andrea Dalmazzini had even more serious problems with the other Grand Vitara of Suzuki Italia, as he had to renounce to two legs because of a broken clutch, and stay behind.

Miki Biasion with his Mitsubishi L200 of Ralliart looks like one of the most disappointed participants. The ex World Rally Champion suffered some radiator problems, which caused him delays and high penalties. His race represents above all a parade for his fans, who still go on supporting him with their sincere love.

BIKES AND QUADS. Everybody was expecting the same results of the 2013 edition, with Alessandro Ruoso from Pordenone still playing the main role, now riding a Honda able to defeat all challengers. On the contrary, the absolute protagonist yesterday and on Friday was Vanni Cominotto with a Yamaha Wr 450; he is another biker from Friuli able to ride fast not only along his local routes (he lives in Dignano, a town very close to the race’s track).

The race valid for the FIM Bajas World Cup unfortunately was the scenery of an accident, which involved the expert biker Alberto Basso with his Honda Crf 450. A disastrous fall on the Meduna fords let us worry about him, but his good health conditions were confirmed in the evening.

Cominotto maintained his supremacy with a considerable gap ahead on Ruoso (2’22’’) and on the Polish Jakub Przygonski (3’28’’), but today’s second final Leg could anyway surprise us. The most evident quads’ result is the one got by Stefano Biscontin with a Yamaha 450 Yzf of the Mgm Team, with a time of 1:20’51’’, ahead on the Polish Kamil Wisniewski.

Among the mix of World, European and Italian championship, Przygonski took the lead of the continental competition, ahead on the Czech Gottvald Zdenek, while the Italian Simone Toro, the fastest quad rider, seized the third position. 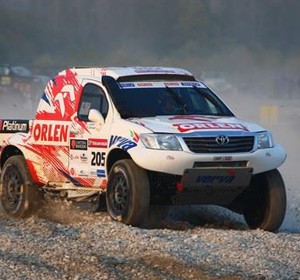 The second round of the FIA Cross Country Rallies World Cup has started today with the  Super Special of 9.2 Km. Memorial...
Copyright 2011-2016 Rallyraid.net - RISE Network. All Right Reserved.
Back to top