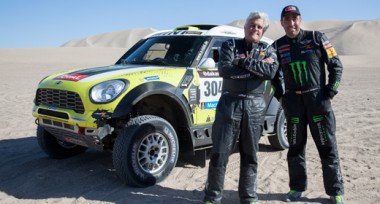 Last week, the MINI ALL4 Racing had a very special guest on board: US-American comedian and TV-show host Jay Leno drove the 2014 Dakar Rally winner. Accompanied by the reigning Dakar Champion Nani Roma, he experienced the strengths of the MINI in the Dumont Dunes between Las Vegas and Los Angeles.

Leno spent the morning in the co-driver seat and enjoyed the experience to be surfed across the dunes with a height of up to several hundred metres by Dakar winner Roma. In the afternoon, Roma and Leno swapped seats and he took the wheel. Jay quickly familiarised with the MINI and soon, he tackled some dunes himself. On his return to the camp he had a beaming face. The video of his ride in the MINI ALL4 Racing can be watched at jaylenosgarage.com.

“Jay did a really good job driving the MINI,” revealed Roma. “It was obvious that he already has driven a lot of cars. Nonetheless, I was somewhat surprised when he headed to first dunes flat out right away. We had a lot of fun together and I think it was a great experience for him.”

Jay Leno: “The thing I found really impressive is that the car is virtually unbreakable. As someone who restores cars and works on cars, I know how fragile they can be. This thing is just a monster. You can push it over and roll it over. That was the most impressive part. As far as driving experiences go, this is one of the great ones. “

Peterhansel, Sainz and De Villiers can be the drivers of the Peugeot 2008 in2015's Dakar 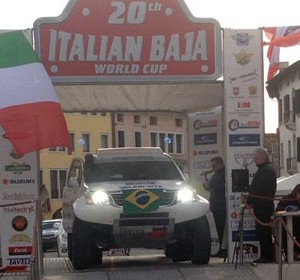 Fresh from taking a stunning victory in Baja Russia Northern Forest ’14 to lead the FIA World Cup for Cross-Country Rallies,...
Copyright 2011-2016 Rallyraid.net - RISE Network. All Right Reserved.
Back to top