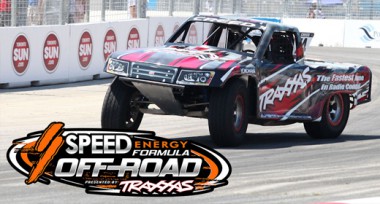 The SPEED Energy Formula Off-Road Series Presented by Traxxas will begin its second season at the Firestone Grand Prix of St. Petersburg March 28-30 and finish the season under the bright lights on the Las Vegas Strip during SEMA week Nov. 3-7 – the premier automotive specialty products trade event in the world.

Traxxas is the No. 1-selling Ready-to-Race® (RTR) nitro and electric Radio Control (R/C) company with vehicles in the truck, car, boat and helicopter categories. No company has done more than Traxxas to advance the RTR category with innovative thinking and fun designs that make it easy for anyone to get started with the durability and performance of Traxxas radio controlled vehicles.

“Being associated with the Formula Off-Road Series provides the perfect forum for Traxxas to showcase the extreme capabilities and incredible fun that our vehicles deliver,” said Traxxas President Mike Jenkins. “The SSTs are fast, jump and fly high, just as their scaled-down Traxxas R/C replicas. The Formula Off-Road Series allows us to market our trucks and cars directly to one of our most targeted groups of customers and put our products in their hands to experience and enjoy.”

As part of its marketing partnership, Traxxas will have on-site “Try Me Tracks” at all SST races where consumers will have a hands-on opportunity to race Traxxas R/C vehicles. There will also be a full product display and demonstration area along with the fully loaded mobile Traxxas store at each event to make it easy to jump right into the fun. Traxxas also will highlight its products through traditional commercial inventory in SST broadcasts on NBC Sports Network and on ESPN at the X Games.

“Traxxas has been a major supporter of SST/Formula Off-Road Series since its inception,” Series founder Robby Gordon said, “and the brand continues to realize the marketing capabilities of our unique series by taking this presenting role after fielding two trucks in the Series in our first season.”

The SST trucks will continue to be branded as Traxxas Slash trucks in all 2014 Formula Off-Road Series Presented by Traxxas races. In several events, most notably X Games Austin, Texas resident and Traxxas owner Mike Jenkins will be behind the wheel of one of the life-sized Traxxas trucks.

The Traxxas-branded life-size trucks are capable of launching more than 20 feet in the air covering distances more than 150 feet with speeds up to 130 mph. What sets the SST program apart from other racing series is that all the SST trucks are identically manufactured. For drivers and sponsors, the opportunity to race at professional venues with hundreds of thousands of spectators throughout the season and millions that will watch the races on broadcast television, make Traxxas Formula Off-Road one of the best values in America. Races are decided by driver skill alone rather than individual team engineering and budgets.

Tickets for the opening round at St. Petersburg are available by visiting www.gpstpete.com. 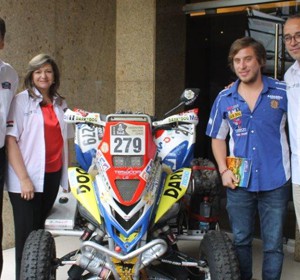 For the first edition of the Desafio Guarani, the riders and crews will cross Paraguay from the north to the south, from...
Copyright 2011-2016 Rallyraid.net - RISE Network. All Right Reserved.
Back to top