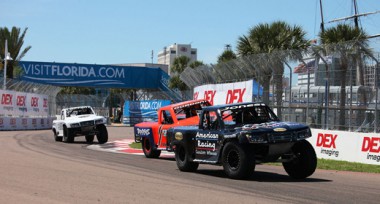 PJ Jones captured Sunday’s thrilling second round of the SPEED Energy Formula Off-Road Presented by Traxxas race at the Grand Prix of St. Petersburg, beating Robby Gordon to the line by a truck length.

“We had a really fast truck and kept our mistakes to a minimum, but you do make mistakes in these trucks,” said Jones, the winner of two of the last three Formula Off-Road Presented by Traxxas races. “Robby and Jerett got racing each other behind me which helped, and I had to hold Robby off when he made a couple of late dives on me on that last lap.

“Best thing is that the crowd was really into it and people have been coming up to me all weekend saying how much they love the trucks and love watching them jump. A lot of them said we were the reason they came here this weekend and can’t wait to see us race again. The fans that didn’t know about us already are fans now, I’m sure.”

Following Saturday’s first race of the season, which had Gordon holding off Brooks and third-place finisher Justin Lofton in a driving rain storm, Jones considered Sunday’s victory redemption for a costly mistake on Saturday. Racing in some of the worst conditions possible, Sunday’s race was a complete opposite with brilliant blue Florida skies and warm temperatures.

More than 75,000 spectators lined the 1.8-mile 14-turn road circuit to watch Jones and the Traxxas-branded trucks launch off of man-made ramps on the same DOT-approved Toyo Tires that consumers can buy. The loud raucous cheers of disbelief from the massive crowd could be heard over the trucks as fans of traditional road racing saw the trucks literally fly through the air side by side. 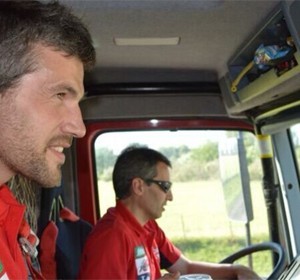 Xavi Mora, the truck driver Dakar carrying 1.4 tons of cocaine, and Jordi Banyeres, teammate and commanding the van that...
Copyright 2011-2016 Rallyraid.net - RISE Network. All Right Reserved.
Back to top