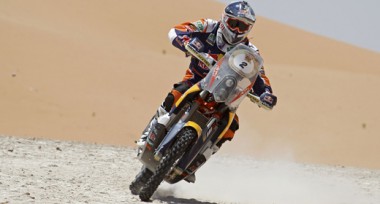 Marc Coma regained his lead in the bikes category after team-mate Sam Sunderland plunged from contention with mechanical failure.

The major casualty on the Nissan Patrol stage was Dubai-based English rider Sunderland who was increasing his overnight lead when his KTM was halted by a broken swingarm, putting him out for the day. Mechanics were later assessing the damage to decide if Sunderland could re-start on the final stage.

The stage had a dramatic mass start for the bikes, with the top 15 riders getting away together  and Sunderland was quickly increasing his lead before disaster struck 22 kms later.

“It’s unfortunate for me but this is racing, and it makes winning that much more special,” he said. “You have to take the highs with the lows. Our team is still going well, Marc is doing really well and we hope for the best possible outcome. Riding with Marc has been a great experience and I’m learning a lot from him. Obviously he’s hugely competitive.”

Coma said: “The group start together on the flat was very nice, but the pace went up and Paulo pushed a lot and I tried to follow. I’m happy with the stage.”

Completing the stage, Goncalves declared: “The pace was a bit slow to begin with up to refuel then it got faster. I got stuck once and lost a bit of time. Now I I’m a few minutes off Marc overall but we will see how it goes tomorrow.”

Barreda Bort said: “I’m very happy today. The mass start was good and a few of us rode together up to refuel, then I pushed forward and focused on a good victory for the stage, and gained a few seconds overall. Unfortunately I broke my cable which cost me about five mins overall. Anyway I will try hard to make up more time tomorrow.”

Al Balooshi, better known as a multiple title-winning motocross rider, said: “It was tough today because of the high pace, and I was happy to keep up. But in the last 30km the leaders pulled away and there was too much dust. The mass start helped me as I did not need to navigate.”

Reigning FIM quads champion Rafal Sonik of Poland increased his lead in the quads division to 42 mins 52 secs from Russian rider Sergey Karyakin and said: “In the mass start I ate a lot of dust from other riders which I think must have gotten into my air filter because three times the engine just stopped and I went over the handle bars.

“Fortunately it’s soft sand so nothing bad happened. But I lost a few minutes. It’s not a big deal. We will just have to soak and clean the filters again and we will be all good for the last stage tomorrow.”

Lying third, last year’s quads winner, Qatari Mohammed Abu Isa, said: “The mass start was very good for us because we got to start with all the leading bikers which set us a strong pace. I’m really tired now but I think I’m catching up on Sonik. I lost a lot of time after I had some problems on SS1, but I caught up a few minutes on him today.” 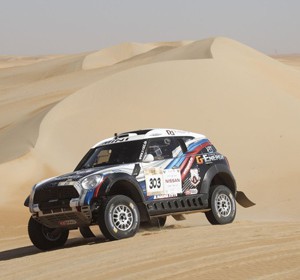