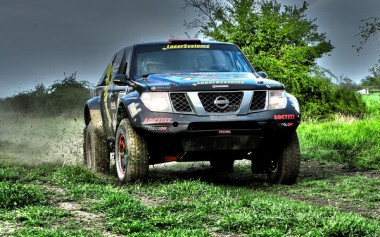 Sólyom Team wasn’t lucky at Túrkeve Cup. On the first day the crew Gyabronka – Radics, running in category TH, rolled and their car was so badly damaged that they had to quit the race. On the second day a mechanical problem lead to an early end of the rally of the crew Sólyom – Galbács.

During the test before the rally the team found everything in order on HAWKING, so there was no previous sign of having any problems with the gearbox or the clutch on Friday’s superspecial – but that happened. And on Saturday the bearings of the stretcher pulley of the V-belt broke down, moreover two times after each other. In the second case, the repair couldn’t be executed on site, so Olivér had to quit the rally.

Olivér Sólyom: “I can’t understand this all. During the superspecial we experienced the symptom that in 4th – 5th – 6th gear the engine revved but the car didn’t accelerate, which is either the clutch’s fault or gearbox’s. With this problem I could live as with this we could have completed the rally. Then on Saturday the transfer section leading to the first special, in the centre of Törökszentmiklós the stretcher pulley stopped and tore the V-belt. Our assistance team managed to change bearings relatively quickly and but after the forfait we were able to return to the race only for the last special. We thought that everything would be alright, but after some kilometres the bearings stopped again and one of them burnt on the axle so badly that we couldn’t repair it. I was very angry that we had to retire because of a 10 Euro part! But after one day I say that this saved us from bigger problem as on Sunday 4-5 crews rolled their cars. Who knows what were the intentions up there…”

Mátyás Galbács: “Apart from the minor mechanical problems the car runs very well, its characteristics are amazing. I have to give the information to Olivér much faster than before because at this speed the marks come very fast. We are a bit disappointed because the KIA pampered us, in the past two years we didn’t retire at any rally. But if we can solve the technical problems of the new car hopefully we can run really nice races.”

Still the team didn’t come home empty handed: at the prizegiving of the 2013 season held before the rally in Szolnok members of Sólyom Team received 14 cups altogether. 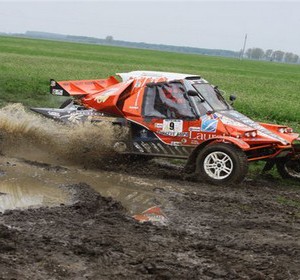 The opening round of the Open Hungarian Championship and the CEZ Cup in Túrkeve was not a walk in the park for Zoltán Hangodi...
Copyright 2011-2016 Rallyraid.net - RISE Network. All Right Reserved.
Back to top