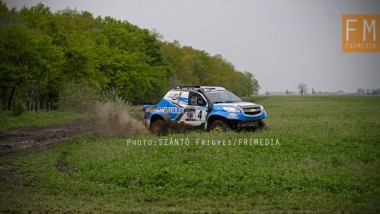 Lukasz Komornicki is in the lead after the longest day of Túrkeve Cup. The Polish driver is followed by Antal Fekete from Hungary and Zdenek Porizek from the Czech Republic. The muddy track held serious challenges for the teams but they enjoyed the fight and the hospitality of Túrkeve.

Lukasz Komornicki and his co-driver Ernest Gorecki (Chevrolet), who were second at the Superspecial, grabbed the lead early during the day and managed to keep it until the evening, although the third gear was still missing. On second place, Antal Fekete and György Tóth (Toyota) had only a 3 minute gap to the Polish duo by the end of the day. Zdenek Porizek and his Slovakian co-driver Marek Sykora (H3 EVO) held third place with winning multiple specials in the second half of the day. Károly Fazekas (BMW X6), Erik KOrda (Nissan Qashqai) and Tomas Ourednicek completed the top 6. 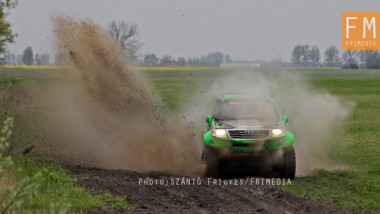 “The mud was deep and we had some problems with visibility. The car is almost half tone heavier because of the mud and so the suspension doesn’t work like it should. We still don’t have third gear but we have an advantage of about two minutes and we are testing the car now,” said Komornicki after the finish.

Saturday, most memorable of the deep mud on one part of the track, was not fortunate for all participants. Worst hit by this problem was Zoltán Hangodi, whose T3 light buggy suffered some serious damages because of the mud, but still he continued the rally. 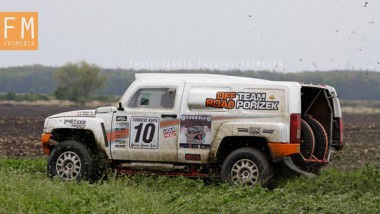 On the fast parts of the tracks many complained about missing speed, like Zoltán Kaposi, who lost four places during the day and Erik Korda, who climbed up nine places after his problems on Friday. Zsolt Murczin’s Mitsubishi L200 had minor brake and clutch problem while on Dodge Dakota of Béla “Gombi” Horváth first the V-belt pulley, then the cardan broke down. Olivér Sólyom’s brand new HAWKING suffered returning problems with the bearings of the stretcher pulley of the V-belt and so had to retire from the race.

In T2, Sándor Sebestyén was in the lead in front of Tomas Horansky from Czech Republic and Mariusz Andrych from Poland. In category TH Piotr Bialkowsky from Poland is in first place in front of the rookie crew of György Lovász and Donát Berki. Among bikes, Richárd Hodola’s advantage over Laller Horváth was nearly four minutes. 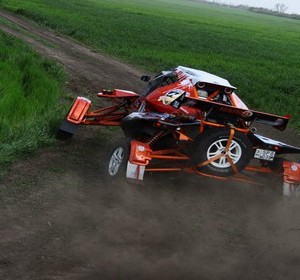 Zoltán Hangodi clocked fifth best time with the Klement Mosquito at the Superspecial of Túrkeve Cup, first round of the Open...
Copyright 2011-2016 Rallyraid.net - RISE Network. All Right Reserved.
Back to top