The dogfight between Honda and KTM continued into day four; overnight leader Joan Barreda, riding a Honda CRF 450, ceded the overall advantage to KTM’s Marc Coma for the second time in four days, although the stage win fell to Honda’s Paolo Goncalves. 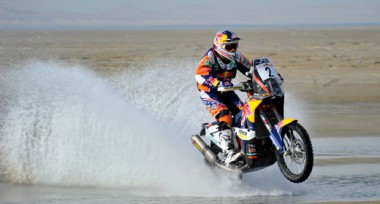 The two leading Spaniards will now go head-to-head on Friday, with Barreda having the sizeable advantage of following the four-time Dakar winner and defending Sealine champion through the stage. Coma has a lead of 41 seconds and starts two minutes ahead of his rival.

“I know it’s going to be difficult now,” said Coma. “It was a very hard day with a very high level of navigation. I lost my rhythm a little towards the end and I now have to give it a go tomorrow. That’s all I can do.”

Goncalves was delighted with the stage win. “I have been recovering time since the first day and it was good to get back a lot of that time against my rivals today. It was a difficult and demanding stage. Tomorrow is the last day and I will need to concentrate and not make a navigation mistake. I have a chance still. You never know.”

Barreda admits that he needs to remain focused. “The strategy is working well. Now I need to keep my concentration and not make any navigational error. I will need to push and catch Marc and stay with him. That is the plan.” 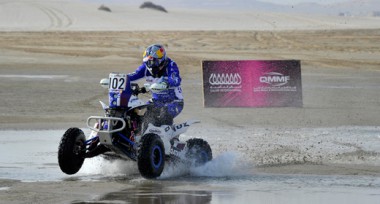 After his navigational woes on Wednesday, Poland’s Rafal Sonik caught Abu Issa, the pair rode together and the Pole managed to win the quad stage by 5min 07sec. Qatar’s Mohammed Abu Issa takes a comfortable unofficial advantage of 29min 14sec into the final selective section on Friday and, barring a late disaster, should snatch the Sealine title from the defending champion.

SS4 – as it happened

There was no respite in the difficulty of the navigation. The fourth 404.18km selective section headed northwest from Sealine towards the Salwa Road and carried on towards Al Owaina before turning west and then south towards Al Kharsaah and then back in a south-easterly direction to Sealine.

Thirteen motorcycles and two quads resumed the competition. Coma was running 1min 18sec quicker than Barreda by PC1, although Helder Rodrigues was the fastest rider on the course. Sunderland fell after 45km and sustained a suspected wrist fracture to cap a disappointing event for the Dubai-based Briton.

Coma continued to attack. He knew that to overturn the Honda strategy he would need to eke out a good lead on today’s stage and he passed the top Honda rider and led by 2min 08sec at PC2. Goncalves was now the stage pacesetter.

Coma, Barreda and Rodrigues arrived together at PC3 and PC4, and Rodrigues had gained the virtual stage lead at the refuelling point. Barreda was playing the strategy perfectly and shadowing Coma’s every move. Sonik edged into a small lead over Abu Issa in the quads and Vasilyev made a navigational error before PC3 and dropped over 25 minutes to third-placed Adam Malysz.

The leading riders had formed groups of three and two at PC5. Rodrigues retained the lead and Coma held a 2min 08sec lead over Barreda heading into the final section across the breadth of Qatar. Ruben Faria had already called it a day and returned to Sealine after PC3.

Goncalves held on to take the stage win and Coma moved 41 seconds in front of Barreda heading into the final day.

Tomorrow (Friday), competitors will tackle the fifth and final 362.97km selective section in a loop around the south of Qatar before returning to the Sealine bivouac for the official podium finish and the traditional post-event press conference. 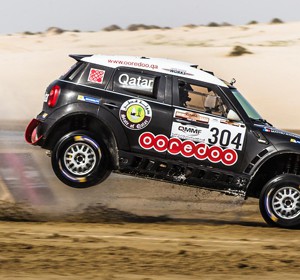