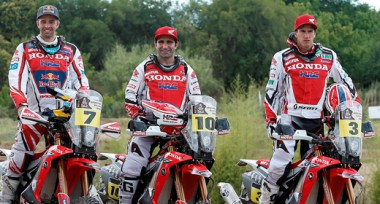 The new 2014 season of Cross-Country Rallies is about to get underway and the new Team HRC is ready for its debut in Abu Dhabi.

2014 will be an important year for Team HRC, as it officially takes part in various world championship tests, with the main goal of consolidating the number one position won by Paulo Gonçalves last season.  In order to complete its immediate goals, the team has been restructured, naming Wolfgang Fischer as Team Manager for Team HRC for 2014 and the Rally Dakar 2015.

The other riders who will race for the Team HRC as well as the others supported riders by Honda in Dakar 2015 and other races, are to be announced shortly.

Martino Bianchi Team HRC – General Manager: After the success of the FIM Cross-Country Rally World Championship in 2013 and a brilliant career in the off-road motorcycle sector, I’m very happy that Wolfgang Fischer takes on the role as Team Manager for Team HRC. One can be sure that Fischer will bring innovation and enthusiasm to the new team as the team undertakes the new 2014 season. With Rodrigues, Barreda and Gonçalves we have three highly-experienced and motivated riders who HRC can count on to be in the running for victory.

Wolfgang Fischer Team HRC – Team Manager: First of all, I want to thank HRC and General Manager Martino Bianchi, for giving me the opportunity and putting their trust in me to work as Team Manager in the new configuration of the Team HRC. After a few years of intensive work with Paulo Goncalves and Joan Barreda growing together to the highest level in the Rally competitions, we are proud to now make the next step and give our full support to Honda’s ambitious Rally project as official team members. Together with Helder Rodrigues and the great staff of the Team HRC we are sure that we can do a perfect job and are already looking forward to being 100% prepared for getting top results in the Dakar 2015.

Helder Rodrigues Team HRC – Rider: I’m really pleased to continue in the team after beginning this project with Honda and Team HRC two years ago. Extending the contract is always a positive move. We are trying to improve everything and organize the team to go on bettering ourselves. It’s great to start the season this way. We will be able to work as a team, concentrate on the races and on the bike’s development. I hope to have a great season and improve on the result of the last Dakar.

Joan Barreda Team HRC – Rider: I’m really proud to form a part of the official Honda factory “Team HRC”. I’m glad that they’ve placed their trust in me and I hope to pay them back with good results. It has been a very important year for us, and now, with the new structure the team can make a leap ahead with a tighter structure focused on the Dakar. The bike is really competitive and we will go on working so that everything will be ready in the summer to take up the great challenge: the Dakar.

Paulo Goncalves Team HRC – Rider: It’s an honor that Team HRC has put their trust in me. I’m really pleased and excited about what is coming up. Wearing the number one for Honda is a great thing for me. I’m happy to be in the running for the championship. The team is superb: on the team we’ve got the rider who won most stage victories in the last Dakar; Joan Barreda, as well as Hélder Rodrigues who was on the podium twice. Honda has put their trust in us and now we have to fight to the limit to pay them back with wins that Honda deserves. 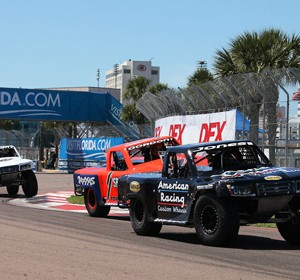 PJ Jones captured Sunday’s thrilling second round of the SPEED Energy Formula Off-Road Presented by Traxxas race at the Grand...
Copyright 2011-2016 Rallyraid.net - RISE Network. All Right Reserved.
Back to top