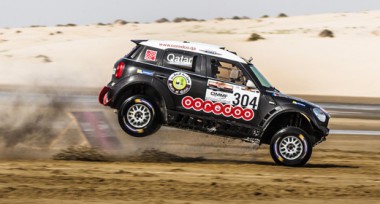 Qatar’s Nasser Saleh Al-Attiyah retain his lead in the car category after a tricky navigational 404.18km fourth selective section of the Sealine Cross-Country Rally on Thursday.

Al-Attiyah and French co-driver Matthieu Baumel turned an overnight lead of 39min 38sec into an advantage of 1hr 05min 11sec over Polish Toyota Hilux driver Adam Malysz with one stage remaining in the fourth round of the FIA World Cup for Cross-Country Rallies.

“I am quite happy,” said Al-Attiyah. “I had no reason to push today. It is very easy to make a mistake here. Matthieu has been excellent all week. No problems with the car and we just have to do the same again one more time. This rally is now at a high level. The navigation is probably the most difficult of them all.”

Poland’s Krzysztof Holowczyc lost his chance of taking a top finish with overheating issues on Wednesday, but the Mini driver stormed back with a useful performance on day four. He was leading the stage all the way to PC5 before losing time with navigational issues. “This rally is very different,” said the Pole. “This is a co-driver’s rally. This is not for the driver. You push like hell for hours and then one mistake and it’s back to square one again.”

SS4 – as it happened

There was no respite in the difficulty of the navigation. The fourth 404.18km selective section headed northwest from Sealine towards the Salwa Road and carried on towards Al Owaina before turning west and then south towards Al Kharsaah and then back in a south-easterly direction to Sealine.

One hundred hours of time penalties had pushed Yazeed Al-Rajhi and Krzysztof Holowczyc down to 15th and 16th overall of the remaining 19 cars in the event. Neither driver held any chance of scoring FIA World Cup points and Overdrive Toyota team manager Jean-Marc Fortin decided that Al-Rajhi should retire from the event and return to Saudi Arabia in advance of next week’s Jordan Rally. Holowczyc decided to continue for testing purposes and experience. Denis Berezovskiy and Emirati Ali Al-Shawi also retired.

Holowczyc was the quickest of the car entrants to PC1 and PC2 from a starting position of 16 and Abu Issa was managing to hold off the Sonik challenge in the quads and had a virtual stage lead of 58 seconds at PC2.

Tomorrow (Friday), competitors will tackle the fifth and final 362.97km selective section in a loop around the south of Qatar before returning to the Sealine bivouac for the official podium finish and the traditional post-event press conference. 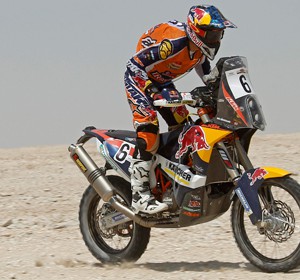