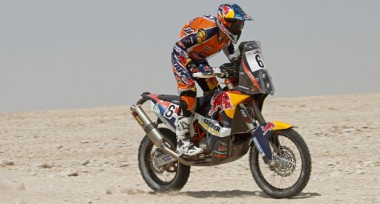 Overnight motorcycle leader Joan Barreda was always going to struggle opening the stage and he reached the finish in sixth position, as Sunderland claimed the stage win and climbed from seventh overall to fifth.

“It looks good on paper to have won the stage, but the strategy and the tactics mean that I will lose it all again tomorrow,” said Sunderland. “Nice stage, tricky navigation and it’s good to get the stage win, but this rally had no Prologue and my seeding position was not really favourable, so I’m back to square one again.”

Coma holds the unofficial lead. “Today was a better rhythm and a better balance for me,” said the four-time Dakar winner. “It’s a case of finding the balance between speed and concentrating on the navigation. To lead the way for 400km is never easy. Temperatures were not a factor, but the sand is more compact in the mornings and that helps a lot. I will just keep going and see.”

Qatar’s Abu Issa was in inspired form on his Honda quad and he managed to catch and ride with Poland’s Rafal Sonik to extend the lead he had inherited on Monday evening when Sonik incurred a five-minute time penalty. Adel Hussein Abdullah was running well behind the leading duo in third place.

“I started two minutes behind Rafal (Sonik) and managed to catch and ride with him,” said Abu Issa. Then, after 178km, at the refuel, I got fuel in my googles and they began to melt. I had to ride on without goggles until Rafal lent me a pair of googles. It was not comfortable at all today, but I managed to keep the lead.”

SS2 – as it happened

Rafal Sonik was awarded a five-minute time penalty after stage one by race officials for having a missing time card and he slipped behind Mohammed Abu Issa and Adel Hussein in the quad rankings. Car drivers Holowczyc and Al-Rajhi were handed one-minute time penalties for minor speeding violations.

The special started to the far south-west of Doha and headed north through the desert along the western coast, before turning south, passing under the Salwa road, and then east across the south of the country to a finish 4.85km from the Sealine bivouac.

Sunderland was in fine form early on and was 55sec quicker than nearest rival Rodrigues to PC1 and Abu Issa had extended his virtual lead over Sonik by 2min 11sec in the quad category. Al-Attiyah continued to edge clear of his rivals and was 40sec quicker than Al-Rajhi to the checkpoint.

Sunderland continued to edge clear of the pack in virtual terms at PC2 and PC3. The Briton was comfortably quicker than Paolo Goncalves, as the tail-enders in the leading group continued to close in on the front-runners. By PC3 and PC4, Barreda, Coma, Goncalves, Viladoms and Sunderland were riding close together and Al-Attiyah extended his advantage over Al-Rajhi to 6min 29sec in the car category.

Sunderland held on to take the stage win and reduce some of the damage his navigational problems had caused on Monday, but it was Faria’s turn to lose his way on the second stage and the Portuguese plummeted out of contention for the win after taking a wrong track early on. He finished the stage before any other rider, but could look forward to over 25hrs of time penalties at the bivouac.

“I lost the way very early and came back into the stage to reach the finish, but it’s over now for me with all the waypoints I missed,” admitted the Portuguese.

Tomorrow (Wednesday), competitors will tackle the longest stage of the entire event – a torturous 411.76km loop stage through southern Qatar – with the first bike reaching the start at 05.45hrs. 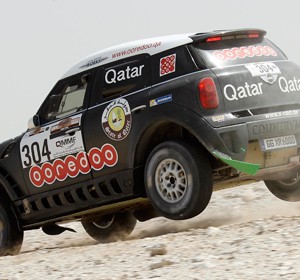