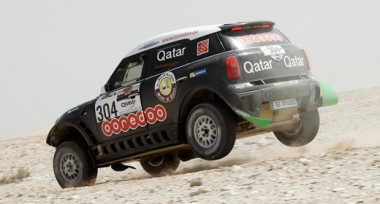 Al-Attiyah and French co-driver Matthieu Baumel led from start-to-finish in their Mini All4 Racing and managed to extend their overall lead to 24min 29sec over Saudi’s Yazeed Al-Rajhi and his German co-driver Timo Gottschalk in an Overdrive Toyota Hilux.

“It was a good day, no problems,” said the Qatari. “To be the first car and open the road is not easy, but the feeling with the car was incredible. Matthieu did a great job for the second day. I pushed hard and I knew this would be a test for him as well. But it was a good job. Maybe I soften the rear suspension tomorrow to make the wheels travel better over the rocky ground, but I am not worried about opening again. I am very happy.”

Yazeed Al-Rajhi was upbeat despite losing his way three times. “I started well and was driving well,” said the Saudi. “Then we lost our way. It is easy to do that in Qatar. There were three Minis going round and round until one of us found the track. I lost four or five minutes, but the goal was to be in front of Vladimir (Vasilyev) and I am doing that, so that’s okay.”

SS2 – as it happened

The special started to the far south-west of Doha and headed north through the desert along the western coast, before turning south, passing under the Salwa road, and then east across the south of the country to a finish 4.85km from the Sealine bivouac.

Al-Attiyah reached the stage finish 11min 15sec in front of his nearest rival in the car category to record a second stage win from Pole Martin Kaczmarski. Al-Rajhi lost time between PC2 and PC3 with navigational errors and finished the stage in third, but moved up to second overall.

Tomorrow (Wednesday), competitors will tackle the longest stage of the entire event – a torturous 411.76km loop stage through southern Qatar – with the first bike reaching the start at 05.45hrs. 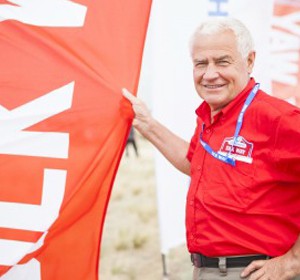 Due to a very tight sports calendar in the Russian Federation in 2014 and in order to have a better balance of the workload...
Copyright 2011-2016 Rallyraid.net - RISE Network. All Right Reserved.
Back to top