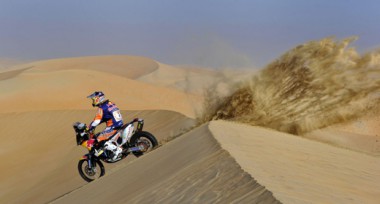 In the battle of the bikes, Spain’s Marc Coma snatched the lead from his new KTM team-mate, Sam Sunderland, finishing the stage with an advantage of 1 minute 25 secs from the Dubai-based English rider.

Seven-times Desert Challenge bikes winner Coma rode alongside Sunderland for much of the stage before moving away from him, while reigning FIM world champion Paulo Goncalves from Portugal was left almost three minutes further adrift.

Coma said: “It was another good day today. Myself and Sam rode together again. They were very tough conditions for sure. There’s still another three days to go so we need to stay on top and sharp.”

Sunderland, who finished third last year, commented: “It was my job to open the piste today and I did that well until the first passage control. Then I missed a hop and I hurt my wrist a little bit after that, but it was ok. Marc took over at the refuel and passed me at the finish. I’m feeling mentally very tired right now but overall it was another good day.”

Reigning FIM world champion Rafal Sonik of Poland who leads the quads category said: “It was very tricky today. The desert showed how unpredictable it can be. You have a series of regular dunes and then irregular ones with drops. You think it is easy but it is not.”

Polish rider Jakub Przygonski crashed 190kms into the stage, injuring his back and breaking his right upper arm. He was taken by helicopter to Madinat Zayed Hospital where he was assessed by doctors and found to be stable. 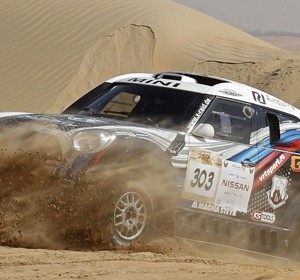