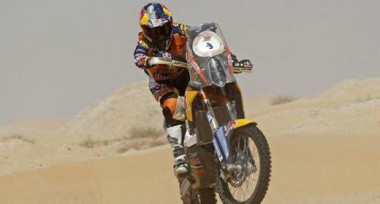 Sunderland, who finished third last year after a time penalty for a technical infringement cost him his chance of victory, made a superb start on his KTM debut, winning the stage by 34 seconds from new team-mate Marc Coma, the seven-times Desert Challenge champion.

The day was marred by the news that Dubai-based British rider Cameron Waugh succumbed to injuries at Mafraq Hospital, Abu Dhabi following an accident on the stage.

The accident happened 155km after the start of the stage, and Waugh was found by fellow rider Jakub Przygonski from Poland who set off the satellite alarm and performed CPR.

Two doctors and a paramedic arrived at the scene by helicopter within 13 minutes and Waugh was immediately transferred to hospital where he was later pronounced dead.

Mohammed Ben Sulayem, President of the Automobile and Touring Club of the UAE, the rally organisers, said: “I am deeply shocked and saddened by the news, and on behalf of the ATCUAE and everyone connected with the event, I send our sincere condolences to Cameron’s family.

“Safety is always our top priority, and the highly motivated professionals in our Search and Rescue and medical teams who responded to today’s accident did everything within their power. Our thoughts are with Cameron’s family.”

Sulayem paid tribute to Przygonski. He said: “Jakub performed CPR to the point of exhaustion, and was heroic in the way he tried to save a fellow competitor.”

After finishing ahead of Coma and Portugal’s reigning FIM world champion, Paulo Goncalves, Sunderland said: “Myself and Marc travelled together and luckily we had tracks from earlier riders. Then towards the end I was able to go ahead. Overall it was a great stage and I’m very happy.”

UAE rider Mohammed Al Balooshi fought his way into the top ten and then said: “Today was tough as I am getting used to the bike and trying to pick up on my fitness so I took it easy in order to finish the stage.”

Last year’s winners of the quads category, Qatar’s Mohammed Abu Issa, came out on top again ahead of Poland’s reigning world champion Rafal Sonik. Abu Issa said: “The stage had more dunes than I expected which was actually quite good for my bike as I had made the settings more suited to that terrain.

“I did struggle a little with the bike in the first half after the changes I’d made after Dakar, but the second half was much better once I got used to the bike again. Unfortunately I lost my time card so I expect a 5 mins penalty.”

The rally bivouac, near the spectacular Qasr Al Sarab Desert Resort, was a hive of activity later as mechanics got to work on cars and bikes to prepare them for tomorrow’s 269-km ADNOC Special Stage 2. 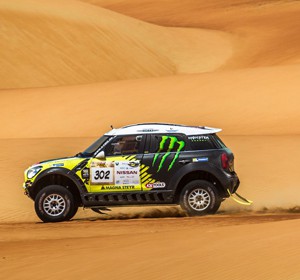