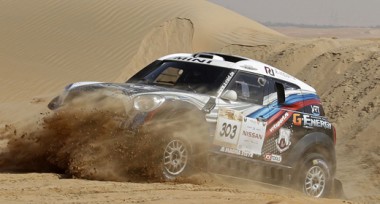 Partnered by Konstantin Zhilstov in a Mini, Vasilyev was fastest on the 269-km ADNOC Special Stage 2 and completed it holding a 44 seconds advantage over the Polish crew of Marek Dabrowski and Jacek Czachor in a Toyota Hilux.

Overnight leader Roma, with French co-driver Michel Perin, saw his hopes of back-to-back wins disappear when he fell ill early in the stage, requiring medical attention before continuing and ending the day almost three hours off the pace in his Mini.

Lying third in the cars category at the end of the leg was Poland’s Adam Malysz in a Toyota Hilux, with Czech driver Miroslav Zapletal fourth in a Hummer followed by the UAE’s Yahya Al Helei who was third fastest on the day in his new Nissan Pick Up.

Vasilyev, who is attempting to become the second Russian driver to find victory in the Desert Challenge following Leonid Novitskiy in 2010, said at the end of the stage: “It was really ok today, despite the dunes being difficult with so many drops that we had to go slower.”

The Minis of Vasilyevand reigning Dakar Rally champion Roma are among six prepared by the powerful X-raid team. Bitterly disappointed at the end of the leg, Roma said: “It wasn’t a good day for me. I just started to get sick from the motion of the dunes before the first passage control and had to stop and get some medical assistance. The doctor gave me a few pills, then I was ok.

“I have this problem in the Desert Challenge a lot, and at least the rally raid team is still in a good position. I will just keep on going for the last three legs.”

Living up to his reputation as a top-class desert rally driver who can compete with the best in the world, Emirati Alhelei said: “I drove hard today passing seven or so cars, but I hit a ridge hard so my suspension is not good and after that I had to drive slower. 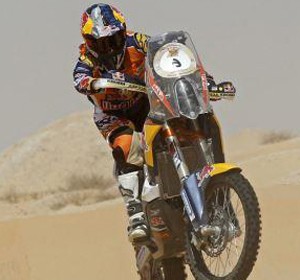