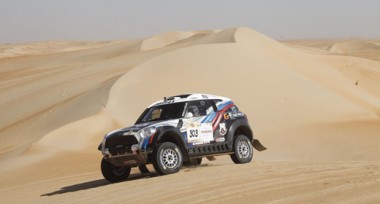 Russian Vladimir Vasilyev moved within sight of his first victory in the Abu Dhabi Desert Challenge Powered by Nissan today.

Partnered by Konstantin Zhilstov in a Mini, Vasilyev recorded the second fastest time on the spectacular 239-km Nissan Patrol Special Stage 4 to open up a lead of 35 mins 36 secs from Poland’s Adam Malysz and Rafal Marton in a Toyota Hilux.

Lying second overnight, the Polish crew of Marek Dabrowski and Jacek Czachor saw their hopes of at least a podium finish shattered when their Toyota Hilux rolled on the stage, with the car landing on its wheels and reaching the finish well down the field.

Dabrowski’s misfortune saw Dutchman Eric Van Loon climb to third in his Mini, with the  UAE’s evergreen Yahya Alhelei rising to fourth place in his new Nissan Pick Up, despite having to reduce his speed because of overheating.

Vasilyev reached the end of the Nissan Patrol stage to say: “It was a really beautiful stage, but hard with some really high and steep dunes to climb. This year it is more difficult because the ground is hard after the rains.”

Alhelei, who had desperately wanted to win the Nissan stage, said: “I drove with a flat tyre for the last 30km yesterday and damaged the head gasket. We changed it overnight and I was worried that the car might overheat today.

“Everything was ok up to the second passage control but then the temperature started going up so I had to reduce my speed. I just wanted to win the Nissan prize for the fastest on this stage.” 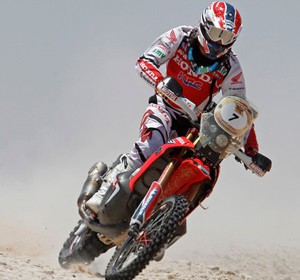 Joan Barreda wins yet another stage of the Abu Dhabi Desert Challenge, commanding from the start after a spectacular motocross-style...
Copyright 2011-2016 Rallyraid.net - RISE Network. All Right Reserved.
Back to top