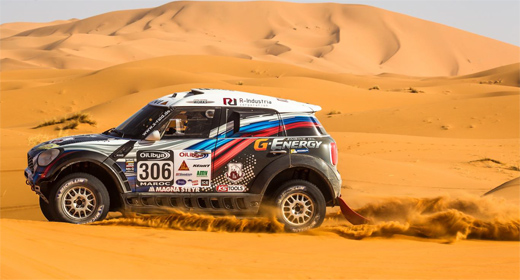 From April 5th to April 10th Russian crew Vladimir Vasilyev/Konstantin Zhiltsov supported by the VRT G-Energy Team will participate in the third round of FIA World Cup for cross-country rallies – “Abu Dhabi Desert Challenge 2014” on the wheel of their MINI All4 Racing with starting number 303!

Thanks to the high level of the organization, perfect logistics and magnificent start and the finish on the basis of Yas Marína Circuit, which hosts a stage of Formula 1 and other prestigious events in the world of automobile sports, “Abu Dhabi Desert Challenge” is named here as a “royal race” in a calendar of rally raids!

On the route of this unique sandy race laid on the well-known sand and dunes of the Arab desert of Rub El Khali, Vladimir Vasilyev and Konstantin Zhiltsov intends to overcome all sand challenges and traps and to earn a new portion of points in FIA classification. Considering that in Abu Dabi the double coefficient of complexity is appropriated to a stage and all scored points also will be calculated in double value, the fight on the race route promises to be spectacular and uncompromising.

“We seriously prepare for race and are adjusted on fight. Based on experience and knowledge of features of this route, we will try to develop the correct tactics and competently to distribute our forces. The list of participants includes a very strong crews, but it gives still bigger interest. As well as at the previous two events of FIA World Cup, the team purpose is to fight for a podium” — said the pilot Vladimir Vasilyev.

24th edition of race comprised with 108 participants from 32 countries. In 6 days of race they will pass 2000 km of a total distance, including more than 1300 km of special stages.

“The “cold” head, the correct tactics and skill of driving in sands and dunes will be the major factors of success in the ADDC rally. This year the strongest structure of the crews is aiming for a podium. Our main goal is to develop the style of a driving in dunes – comfortable, fast and reliable” – commented the navigator Konstantin Zhiltsov.

The rally program opens on April 3rd with the administrative checks, scrutineering and for X-Raid staff the pre-starting “shakedown” is planned as well on April 4th. Further in timing the ceremonial opening and a short Prologue and finally the caravan will take it way for 5 days to the heart of the hot desert to pass its challenge and catch the top positions in general classification. Celebration of the winners and prize-giving ceremony will take place on April 10th in Abu Dhabi.

Bikers back on track 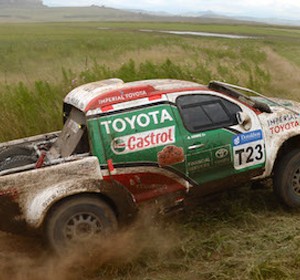 Winners of round one of the Donaldson Cross Country Championship, Anthony Taylor and Denis Murphy, are ready to tackle new terrain...
Copyright 2011-2016 Rallyraid.net - RISE Network. All Right Reserved.
Back to top