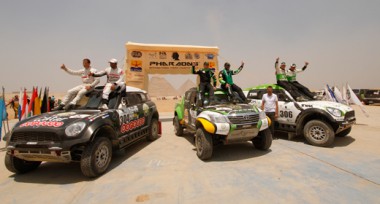 After an intense week made of desert, high temperatures and hard tracks, the arrival to the Giza pyramids is really a moment of relief for the Pharaons Rally 2014 survivors. Emotions, some tears of joy, many souvenir photos with the fantastic Pyramids on the background.

No particular surprises has shaken the general ranking, so Yazeed Al Rajhi, Juan Carlos Salvatierra and Rafal Sonik were crowned as new pharaons, in car, bike and quad categories. Nasser Al Attiyah tried in every way to attack Saudi, he overtook him at km 50, but Yazeed had only to control by distance Qatar pilot dust, and lost only three minutes on track. 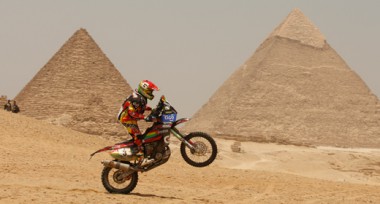 Few surprises even in bike category, where Juan Carlos Salvatierra won today the last stage of a rally he literally dominated. Nicolas Cardona, fourth in today stage, arrived after him with a delay of 44 minutes.

Third podium position was decided during the last Rally km even in the motorbike category. Polish Rafal Sonik succeeded in overtaking Stefano Chiussi, third until yesterday, that because of the dislocated shoulder had to keep a lower rhythm. Italian is however Over 450 category winner. Fifth position for Venezuelan Rafael Eraso, in front of Stefano Turchi and Paolo Sabbatucci.

Yazeed Al Rajhi: “It has been a great day and a really wonderful competition. My team helped me a lot, so as my copilot Timo, that made a great job. He always checks how I feel and is able to give me the right incitement. I don’t have a lot of experience in Cross Country Rally and for that reason I’m very proud for having fought against Dakar winner. It has been a week made of great satisfactions, like the one of having reached him yesterday. Today, it was hard to keep concentration, during the last 50 kilometers I was just thinking about giving gas in order to keep in view his dust. ”

Nasser Al Attiyah: “Today, it was not possible to recover eight minutes in such a fast stage. Yazeed made a good challenge. Overall, it has been a very hard competition, with different difficulties. Next year I will come back with buggy! It has been a completely new rally to me, and it reminds me about Dakars in Africa, I am really happy to be here at Pharaons! I saw the Pyramids a lot of time, but being in front of them today is really special.”

Erik Van Loon: “A very fast day, a bit dangerous sometimes, We lost some time but we saw that Dabrowski had some troubles. We had some small trouble at the beginning of the rally, but then things started to go better during the last two days. Third position was our aim.”

Juan Carlos Salvatierra: “It’s incredible to be the Pharaons winner and to think that my name is together with Coma, Despres, Barreda ones…Its the more beautiful satisfaction in my agonistic career. It has been a great experience to open the track every day. Now I’m much more confident with navigation. I’ve learned really a lot in this competition and today I’ve just tried not to make mistakes and not to fall down in order to reach these wonderful Pyramids.”

Nicolas Cardona: “I’m happy, to get the second position In a Rally like Pharaons with all its history, gives me even more incentives to go on with competitions. I’ve learned a lot during this week and I’ve tried to win until the last day, but Salvatierra’s bike is faster. In fact I would like to change mine in order to be much more competitive.”

Rafal Sonik: “A too fast stage, and quad is 20 km/h slower than bikes. I was worried about Stefano Chiussi to reach me, but it not happened. I was still looking behind me and I’ve tried to push as much as I could. Bu the end I was loosing oil from engine, so it was fine to reach the finish line. I’m happy to be here, I arrived second for two times among quads, now victory has finally arrived.”

Pharaons: Al-Rajhi was faster than Al-Attiyah 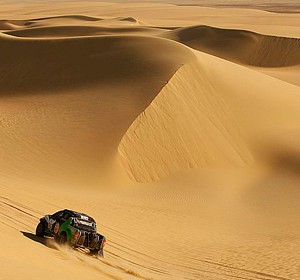 Pharaons: Al-Rajhi was faster than Al-Attiyah

It's always interesting the fight between Nasser Al Attiyha who tries to attack and Yazeed Al Rajhi that does not seem to cede...
Copyright 2011-2016 Rallyraid.net - RISE Network. All Right Reserved.
Back to top