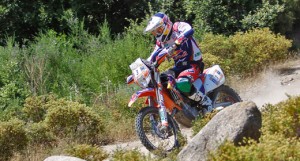 From June, the7th to June the 12th, the “Stars” of the Cross-Country Rally will fight in Sardinia. All the best riders will join. The expansion of Bike Village’s World Championship involves Quads, and this year SSVs also. The latter will have a trophy and a dedicated experimental Raid.

Last days to refine enrollments; Sardegna Rally Race with its seventh Edition is now in the finishing straight. The Cross- Country Rally World Championship arrives in Sardinia to compete in the biggest fight of the 2014 season. Marc Coma, the reigning champion and winner of the Dakar has “promoted” a challenge and all the greatest specialists have bravely responded. In order to oppose the KTM champion, the Honda team will join the competition. Also Joan Barreda will compete even if he initially had not scheduled “Sardegna” in his programs. The renewed Yamaha formation will “land” with a team composed of ten elements. Then there will be Sherco, Beta, Speedbrain, all the strongest Teams with the strongest riders. For the first time during this season, there will be the ” Meeting ” of the World Champions in its entirety. A success that is not exceptional for the rally organized by Bike Village, but almost clamorous if analyzed within the context of a World Championship de facto ​​increasingly in crisis. 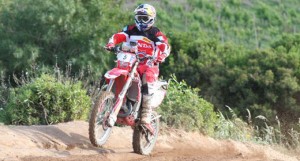 Sardegna Rally Race is considered as the motorcycles World Championship by definition. But everyone likes Sardegna Rally Race, and everyone recognizes its exceptional value. Together with the Champions of the two wheels, the Quad Aces come running, ideally led by champions like Rafal Sonik and Camelia Liparoti.

This year Sardegna Rally Race also experiences the thrill of the SSV. The small, shiny four-wheels will have two events “merged” with the Sardegna Rally Race, the SRR-SSV Trophy and an experimental raid. For the “crew” of the youngest disciplines of the off-road, there is the curiosity and the interest of not losing the opportunity to attend an exceptional event in a unique environment. But there’s also the “fear” to have to deal with a challenging path such as the “Sardegna” one. For this reason, Bike Village has chosen and developed together with the legend Thierry Charbonnier an experimental formula that will please everyone: from competitions experts to amateurs. The SRR-SSV Trophy, if compared to the Motorcycles World Championship will have a shorter and easier route. For SSV enrolled in Raid SSV Sardegna an even more “workable” logistics has been developed. Even for small four wheels “vehicles” making their entrance into the specialty, this will be the great opportunity to become protagonists of an event and of the growth of the discipline.

As always, Sardegna Rally Race 2014 will develop its path on five stages. The path is largely “unreleased” in terms of the layout and the Special Stages, and will rely on a simplified logistics. The caravan will stop twice in Arbatax and in San Teodoro for two days,, in order to give life to a “ring” stage with start and finish in the same place. The Marathon Stage, characterized by no assistance, will have a new “location” no less striking than those which have made the history of the Sardegna Rally Race. now it’s St. Leonard time. The path of the Prologue has been defined, and it will be valid for the starting order of the first stage: the inaugural stage of Sardegna Rally Race seventh edition in the name of the show. Spectators are warned!

‘Bang Bang' Barreda, star of the Dakar presentation in Spain 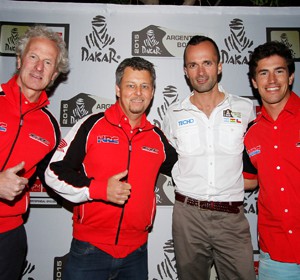 ‘Bang Bang' Barreda, star of the Dakar presentation in Spain