‘Bang Bang’ Barreda, star of the Dakar presentation in Spain 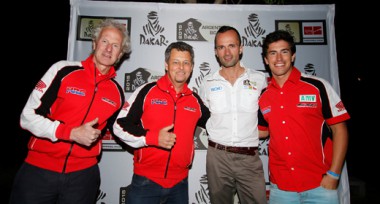 Team HRC rider Joan Barreda, currently leading the World Cross-Country Rally Championship, and winner of the most stages in the last Dakar, was once again in the limelight. This time the rider was in the glare of the cameras and media for the presentation of the 2015 edition of the Dakar held in the magic mountain of Montjuïc of the Catalan capital. Likewise, his Honda CRF450 RALLY was grabbing almost as much attention as the rider from Torreblanca himself.

Team HRC is taking time off from its programme of World Rally Raids to attend some of the most important events in the build-up to the main challenge: the Dakar. The Spanish presentation is one of the key dates in the ASO, just days ahead of the opening of the race’s registration period.

The presentation of the Dakar 2015 edition was in the hands of Xavier Gavory, head of participants service at the Rally Dakar, who outlined the key aspects of the race. Since last March’s previous presentation in Paris, the stages have now been defined, as well as other important aspects including the marathon stage, the differences of route for bikes and cars, and the motorcycle rest-day, which unlike that of the other vehicles, will take place in Iquique, Chile.

Joan Barreda : We are hoping that it will be a Dakar in line with those of recent years. We start out in Argentina and we’ll quickly find ourselves in the Andes mountain range, with some very high and extreme stages. You can be sure that they will be looking to take things to the limit, even more so than last year. The race will be back in Bolivia which was a big success last year, with some stages at high altitude. They will be looking for dunes in the Atacama desert in Chile, which will be a first. I’m sure that it will be a very complete Dakar. Finally, to finish there will be some routes in Argentina, very similar to the ones that we have seen in the World Rally Championship, but always with some new challenges. 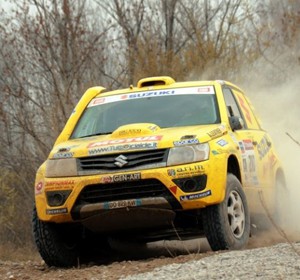